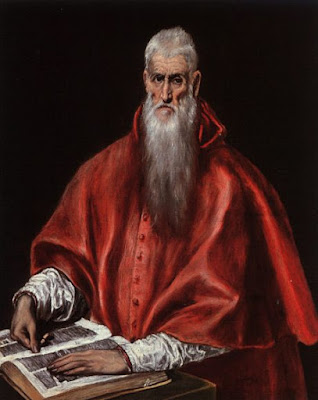 The fourth century AD , which had its important moment in the 380 with the edict of Emperor Theodosius who ordered that the Christian faith had to be adopted by all peoples of the empire , is full of great figures of saints, Athanasius , Hilary, Ambrose, Augustine , Chrysostom , Basil and Jerome.

The latter was born in Stridonia (Dalmatia ) around the year 340, he studied in Rome where he was baptized. His spirit is encyclopedic , his literary work reveals the philosopher, the orator , the grammarian , the dialectical , able to think and write in Latin, Greek, Hebrew writer, rich , pure and robust at the same time. He was responsible for the Latin translation of the Old and New Testament, which became, with the title of Vulgate, the official Bible of Christianity.

Jerome is a personality very strong : everywhere where you raise enthusiasm or controversy. In Rome lashes the vices and hypocrisies and calls for new forms of religious life , attracting them to some influential women patrician of Rome, who then follow him in the hermit's life in Bethlehem.

The flight of the society of this exile voluntary due to his desire for inner peace, not long lasting , because every now and then reappeared with a new book. The roar of the " Lion of the Desert "will make themselves heard in the East and West. His verbal violence were for everyone. had harsh words Ambrose for Basilio and even to his friend Augustine had to spend several drinks bitter . Proves the correspondence between the two great Doctors of the Church which are preserved almost in its entirety. But I knew soften its excesses character when the controversial he would become director of souls.

When I finished a book, going to visit the nuns who had ascetic life in a monastery not far from yours. The listened, answering their questions. These women smart and live were a filter for your explosions unless timely and he paid them the support and nourishment of a culture spiritual and biblical . This extraordinary man was aware of its limitations and faults. The remedied beating his breast with a stone. But he also realized its merits, so much so that the long list of illustrious men who made a brief but valuable summary ( De viris illustribus ) ends with a chapter devoted to himself. He died at age 72 in 420 in Bethlehem.