Exaltation of the True Cross 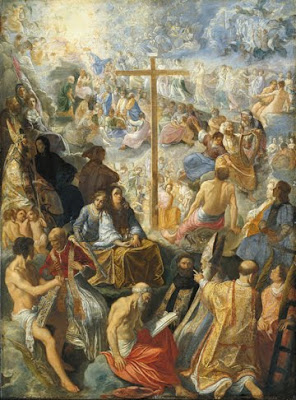 Around the year 320 in Constantinople by the Empress Helena found the True Cross , the cross that killed Jesus Christ, The Empress and her son Constantine were built on the site of the discovery of the Holy Sepulchre Basilica , which kept the relic.

Years later, King Chosroes II of Persia, in 614 invaded and conquered Jerusalem and carried the cross , putting it under the feet of his throne as a sign of his contempt for Christianity. But in 628 the emperor Heraclius managed to beat him and recovered the Cross and took her back to Jerusalem on 14 September that year. This ceremony was performed in which the cross was taken in person by the emperor through the city. Since then, the day was noted in the liturgical calendars as that of the Exaltation of the True Cross.

Christianity is a message of love . Why then exalt the Cross? In addition, the Resurrection , rather than the Cross, gives meaning to our lives.

But that is the Cross , the scandal of the Cross , St. Paul. We would not have introduced the Cross. But God's ways are different. The apostles rejected it. So do we.

The Cross is the fruit of freedom and love of Jesus. It was not necessary. Jesus wanted to show their love and solidarity with human suffering. To share our pain and make it redemptive .

Jesus has not come to abolish the suffering : the suffering will continue with us. Neither has come to explain : to remain a mystery. He came to accompany him with their presence. In the presence of pain and death of Jesus, the Holy One, the Innocent , the Lamb of God , we can not rebel against our suffering or to the suffering of the innocent, but remains a huge mystery.

Jesus, in his youth , it is removed to open up and accept it paradise with the strength of his kindness: "In the fullness of life and took the step path to death because he wanted to . Look, wide , paradise, open by the force of a Lamb " (Hymn of Lauds ).

Throughout his life Jesus did nothing but diminishing: in the Incarnation in Bethlehem, in exile. Persecuted , humiliated and condemned. Only up to go to the Cross. And it is high, as the serpent in the wilderness, that we will see better, to attract and instill hope. Because Jesus does not save us from outside, as if by magic , but by sharing our problems. Jesus is not on the Cross to indoctrinate Olympian , with words, but to share our pain in solidarity.

But the disciple is not better condition than the teacher, says Jesus. He adds: " Whoever wishes to come after me must deny himself and take up his cross and follow me . " It is easy to follow Jesus in Bethlehem in Tabor. How well we are here! , said Pedro. In Gethsemane he falls asleep, and then denied .

"It goes to heaven today or in twenty years. It is when you are poor and is crucified "(Leon Bloy ). " Come up to my Cross . I have not downloaded it yet " (Lord John of the Cross). Do not be afraid . The Cross is a plus , enriches , not a minus sign. Suffering passes, having been acquired in adulthood , the pain never -fail . Cross two sticks that cross , if we accommodate our will to God , it weighs less. If we kiss the cross of Jesus, Let us kiss ours, his chip .

It is the ambiguity of the pain. He who does not, is immature. He who accepts it is sanctified . Whoever rejects it, was bitter and rebellious .

Word Cross shines bright
Shine as the most sacred flesh
Of the Jesus born of the Virgin
That the glory of the Father lives and shines .

Adam groaned , suffering and troubled,
Tears poured Eve with Adam ;
their faces shine the glorious cross
Cross that lights up when the Word expires.

Salve cross the mountains and roads,
Soft medicine with the patient ,
royal throne of Christ in families,
cross of our faith, Hail, holy cross !

Mr. Reine crucified
Lifting the cross where he died ;
Our eyes look sick light
Our lips , the river of life.

We adore you, O Cross that we manufacture,
Sinners , hands deicide ;
We adore you, Lord of the ornament ,
Sacrament of our eternal happiness. Amen

. Lord , our God, that you wanted to save men through your Son died on the cross , we ask you , since you have given us on earth to know the mysterious power of the Cross of Christ, that we can achieve in the sky the fruits of redemption. Through our Lord Jesus Christ, your Son .-

The royal banners forward
And the mysterious cross shines on them :
The cross in life suffered death
And that, to suffer death , gave us life.

She held the sacred body
That, being hard hit by the spear ,
blood and water poured in abundance
To wash our sins with them .

It perfectly fulfilled
What David prophesied in verse
When told the people of the earth :
"Our God reigns from a tree. "

Tree full of light, beautiful tree,
tree baked with the royal purple
and for his dignified trunk
feel the touch of pure meat !

Happy cross your arms firm
they hung our price,
balance for the body you were holy
that took away their prey to hell !

To you, you're the only hope
We magnify you , O Cross, and we pray
That increases the grace of the just
And erase the crimes of the wicked.

Receive , O Trinity, source safe
The praise of all spirits ,
And you give us your cross the win
Add us the prize, oh Jesus Christ. Amen