When GOD created the angels, these beautiful spirits of light and love lived in the Kingdom of Heaven, when GOD created them he gave them holiness, beauty, and wisdom. GOD wanted to test the angels to see if they loved him before they saw him face to face in Heaven. Outof many angels, one of the most powerful angels was Lucifer, whose name meant "Receiver of Light." Glad with his power, he shouted a yell of disobedience yelling "I shall not serve GOD!" But another Archangel, Michael, shouted a yell of love and obedience yelling "Who is like GOD?!" In a great battle, the Good Angels threw the Evil Angels out of Heaven and into Hell. As a reward for his love and obedience GOD made Michael Prince of the Celestial Courts. Since the beginning of time, St. Michael was the chief of the temple chosen by GOD. In the new testament Michael is the Guardian Angel and protector of the Holy Catholic Church. The name Michael means "Who is like GOD?" 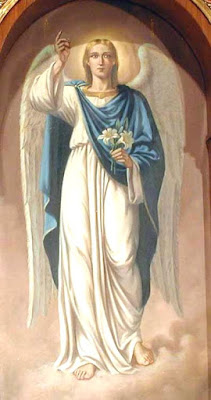 According to the prophet Daniel, St. Gabriel was the Archangel that announced the coming of Jesus Christ our Lord and Savior. He appeared to Zacharias, to announce the nativity of St. John the Baptist, cousin of Jesus Christ. The greatest honor of Gabriel consists of being sent by GOD to Mary in Nazareth and announce to her that she was chosen to be the Mother of GOD. The name Gabriel means "The Power of GOD." It is used that way because Gabriel was God's messenger and his messages show us the power and glory of GOD. Some fathers of the Catholic Church say that he was with Jesus when Jesus was agonizing on the cross. He is the angel of the incarnation, consolation, and mercy. In the beginning of time Gabriel was venerated by Christians. Like Gabriel gave us the first word of the Hail Mary, pray to him to help you pray the rosary with a real devotion. 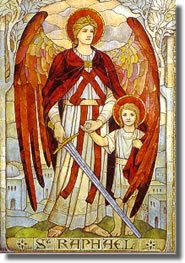 He is one of the three Archangels that appears in the Bible. He disguised himself as a human, and followed and helped the young man Tobias. On the journey he made a demon leave the body of Sarah, daughter of Rachel, who later married Tobias. And revealed that he was an Archangel to Tobias.Then they went to receive the money of Gabelo and led young Tobias back home safe and alive. When he entered into Tobias' home he healed Tobias' mother in law. (Tobias 5:11) and filled the house with blessings. The name Raphael means "GOD heals." He is Patron Saint of those who travel, doctors and nurses, and the young especially those who have the vocation of becoming a religious. He is called the Angel of love and happiness.

Prayer
God our Father,
in a wonderful way you guide the work of angels and men.
May those who serve you constantly in heaven
keep our lives safe from all harm on earth.
We ask this through Christ our lord and Savior.
AMEN 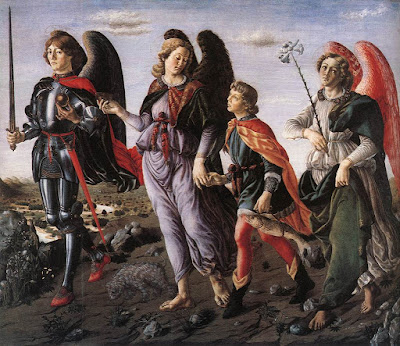