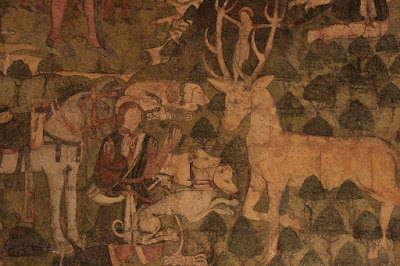 When one realizes that it is done for the Lord , everything looks through the prism of his love.

Young Eustace lived between 98-117 . No doubt , when considering his personality, one realizes that he was the youngest general and appreciated throughout the Roman Empire.

But happy. One day while hunting, achieved something that had long expected : his conversion to Christianity and to escape the false gods that had the Roman Empire.

A deer , which was pursued , turned and turned his face, he saw a cross in the woods and it led him to embrace the life of believers in Christ the Lord.

At the same time , his wife Teopista was visited by an angel and also became a Christian.

The next day, were so happy that they told her the idea of converting his two children, and were baptized.

Ten days later he returned to tell the deer Eustachian pray a lot because the devil was going to attack hard.

Within a week all of his slaves died of fever along with their cattle.

The bandits came and burned the castle and stole all the money. He also attacked him and his entire family . Seeing this, he sailed for Egypt.

Were sold to a slave trader . He worked as a farmer , his wife and caretaker of a lodge and two children as messengers of boutique. Entering as emperor Trajan, the general sought tube. They found him and drove the enemies of the border.

We had to celebrate the victory. And with it the worship of the gods. They refused to take part and , without more, he killed his entire family.