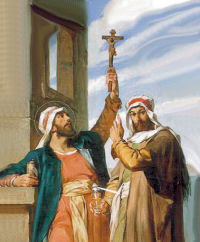 " The twin brothers Cosmas and Damian, medical profession, after they became Christians , frightened by the disease only merit of his virtues and the intervention of your prayers ... her crown after various tortures , they gathered in the sky and make in favor of their compatriots many miracles. For, if a patient presents full of faith to pray over his grave, when you get healing.

Many also refer to these saints will be appearing on the sick dreams telling them what to do , and then run it , are cured. On hearing this I refer many things that would be too long to tell , considering that enough has been said " .-

Despite references to martyrdom and breviary , it seems certain that both brothers were martyred and buried in Cyro , not far from the Syrian city of Aleppo. Theodoret , who was Bishop of Cyrus in the V century , refers to the magnificent Basilica Saints both had there.

Since the first half of V century there were two churches in his honor in Constantinople, when they had been engaged in two days of Justinian. The emperor also built them another in Pamphylia.

In Cappadocia, Matalasca , Saint Sabas († 531) became Basilica of Ss. Cosmas and Damian the home of his parents. In Jerusalem and Mesopotamia also had temples. In Edessa were patrons of a hospital built in 457, and Saints said that the two were buried in two different churches in this city monastic .-

In Egypt , the calendar notes that 535 Oxyrhyrico of San Cosme has its own temple . Coptic devotion to both Saints was always very earnest .

In St. George at Thessalonica appear in a mosaic with the word of martyrs and doctors. In Bizon, in Scythia , is also a church deacon Stephen lift them .

But perhaps the most famous of the shrines was the eastern Aegean, in Cilicia , the birthplace of the legend called "Arab" , recorded in two passions, and is that reflected our current liturgical books.

These Saints , who along V and VI century had conquered the East, also entered triumphantly in the West. We have already referred to the testimony of St. Gregory of Tours. We have testimonies of their faith in Cagliari (Sardinia ) , sponsored by San Fulgencio , a fugitive from the barbarians. In Ravenna there own mosaic VI and VII century . The Verona Visigothic sentence included in the calendar of saints celebrated the Church of Spain .-

But where they enjoyed exceptional popularity was in Rome itself , coming to have devoted more than ten churches. Pope Symmachus ( 498-514 ) consecrated a chapel to them on the Esquiline , which subsequently became an abbey . Saint Felix IV, was the year 527, became famous for ecclesiastical use two old buildings, the Basilica of Romulus and the sacrum templum Urbis, the civil file attached to them , located on the Via Sacra , the Forum , dedicated to the two anárgiros physicians .-

So great development reached its worship, especially the influence of the Byzantines, who , in addition to this date of September 26 were assigned by the work of Pope Gregory II the station on Thursday, coinciding with the third week of Lent , when it occurs the exact date of half of this time of penance , which resulted in large attendance of the faithful, who came to the doctors to implore heavenly health of body and soul .-

Case really strange, the text of the Lenten Mass refers preferably to those saints that are mentioned in the collection , secret and postcommunion , playing in liturgical texts with the word salus in the Introit and Offertory for reading and being evangelical narrate the healing of mother- Saint Peter and many other miraculous cures wrought at Capernaum the Lord that day and the release of many possessed. This scene of compassion was a reflection of which was repeated in Rome , in the sanctuary of anárgiros , by the prodigies performed between patients who were entrusted to them .-

One might ask : Why not today these glorious Santos held the wonders of the ancient ages? Perhaps the answer could be put through another question: Why today we do not entrust them with the same faith, faith that the miracles start ? .-

But what should not be shut down is that faith, that the hand of the Lord "has not been made . " And if San Cosme y San Damián continue to be patrons of physicians and pharmacists , we may continue to exercise with a prayer like this , the old Hispanic liturgy :
martyrs Saint Sabas September 26 Ss. Cosmas and Damian St. Gregory of Tours twins