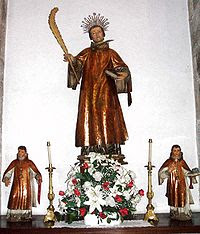 The patron saint of hunters and the Spanish city of Palencia was a young man who walked between two fronts: the struggle and loneliness.

He was born in the south of France, in Narbonne when mediated the third century AD.

As it was an adventurous spirit , he went to Italy soon . In the city of Palermo ordained priest, because of his preaching and his gifts , including stressing the sanctity of personal life and its diffusion to others.

Christians worship and knew the singles collect basic data of life of these holy martyrs. Thanks to them we can mention now and rendering our heartfelt devotion .

In Palermo was no less than 18 years working for the kingdom of God through the proclamation of the Gospel .

For personal reasons he returned to France . And at that time reigned in this region, belonging to Toulouse , his uncle Theodoric.

Once he learned that his nephew was Christian, he ordered the arrest and during seven days was not given food or anything. However, a friend of his - to serve some genuine friends - helped him in secret. This could bear hunger which he submitted the pagan ruler.

It was caught in the death of his uncle. Then he was free. He sought the solitude of a nearby forest to live in peace , prayer and quiet, and away from the madding crowd.

Galatia , name of who succeeded his uncle in the kingdom, was also to take up arms .

Following the conduct of his predecessor , put back in jail. This time was no longer alone. A good group of friends , who converted to Christianity , accompanied him to suffer martyrdom for the faith in the Lord.

Their bodies were thrown into the river Aregia .
It is said that King Sancho of Navarre , very fond of hunting , he went to hunt deer. And walk he found a cave. He saw an animal and tried to kill him, but his hand was paralyzed. This cave is kept in the crypt of the Cathedral of Palencia.