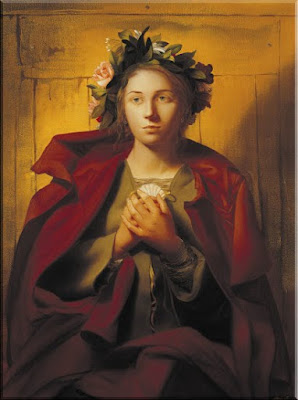 A native of Pisa, she is reported as having experienced visions from an early age. On one occasion, the figure on the crucifix at the Holy Sepulchre church held out his hand to her. At another church, she saw a vision of Jesus, the Virgin Mary, and three saints, including James the Greater. She was frightened by the light around these figures, and ran away. James pursued her, and led her back to the image of Jesus. Bona observed a very pronounced devotion to James for the rest of her life. By the age of ten, she had dedicated herself as an Augustinian tertiary. She regularly fasted from an early age, taking only bread and water three days a week. Four years later, she made the first of her many journeys, going to see her father who was fighting in the Crusades near Jerusalem. On her trip home, she was captured by Muslim pirates on the Mediterranean Sea, wounded, and subsequently imprisoned.
Remains of Santa Bona, in Church of San Martino, PisaShe was later rescued by some of her countrymen, and completed her trip home. Shortly thereafter, she set out on another pilgrimage, this time leading a large number of pilgrims on the long and dangerous thousand-mile journey to Santiago de Compostela, where James the Greater is honored. After this, she was made one of the official guides along this pilgrimage route by the Knights of Saint James. She successfully completed the trip nine times. Despite being ill at the time, she took and completed a tenth trip, and returned home to Pisa, dying shortly thereafter in the room she kept near the church of San Martino in Pisa, where her body has been conserved up to nowadays.