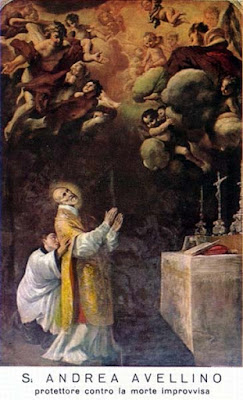 Born in 1521 in Basilicata,Italy. Baptized with the name of Lancillotto. Andrew was a ecclesiastical lawyer. He then left his career of being a lawyer, to become a priest. Andrew was ordained priest at age twenty four. Andrew encountered with the Society of Jesus or the Jesuits.Andrew becam a part of the Theatines. Andrew was assigned to a convent in Naples,Italy that becaome a brothel. When he became a priest a local man threatened to murder Andrew. Andrew traveled all of the nation of Italy, reforming other religious orders. Andrew was giving a mass when he had a heart attack and died during mass. He died Nvember 10, 1608 at age eighty eight. In 1624, only 16 years after his death, he was beatified by Pope Urban VIII, and in 1712 was canonized by Pope Clement XI. His patronages are Naples, Sicily; invoked against sudden death.

Prayer
God Almighty in this year of the Priest,
may your servant St. Andrew Avellino be an example to live by.
Grant this through Christ our Lord. AMEN.
God heart attack Lawyer love Mass November 10th Priest St. Andres Avellino Sudden Death