St. Teresa Benedicta of the Cross 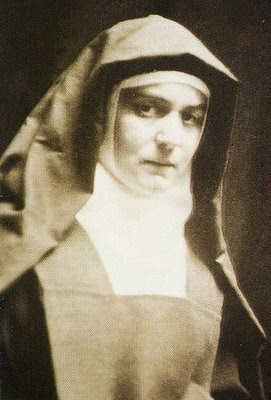 She was born on October 12, 1891 in Breslau , Germany (now the Polish city of Wroclaw) . Her father , Siegfried , died when she was only 2 years old and her mother, Auguste , took over the family business to raise her seven children. Clever, studious , vivacious , had to struggle against the prejudices of one's family to pursue their studies at a time when not considered necessary that the woman had intellectual formation. Upon reaching the youth was declared atheist and began a determined and sustained effort to find the truth. She became one of the first women in college , she studied Germanic Philology , History and Psychology , was a member of the Prussian Association for women's suffrage " which won the female vote in 1918. "As a young university student, was a radical feminist " openly declared that it was unwilling to leave the profession because of marriage, family and children . Since 1913, he was a student of Edmund Husserl , graduated in philosophy in 1915 and did his PhD in 1916 in "The Problem of Intuition , " Husserl 's assistant becoming the University of Freiburg. She returned to Breslau in 1918 and ran for a professorship at the university , which was denied by a woman. This led her to engage in a struggle to open the teaching at all educational levels for women of future generations. In 1920 the government published a decree in favor of access to examinations for university professorship for women. She devoted herself to teaching, especially aimed at women who urged them not to settle for a mediocre education and strive to be present in all fields of acting and thinking. For her no profession was denied them and was much that could contribute to society . Personally attending to each of her students and their quest to support and help as many women as possible published its Monthly Letter for professional women." In 1932 she was named to the German Institute for Scientific Pedagogy in Munster. Shortly after the riots began that preceded World War II and was expelled from the Institute for its known Jewish ancestry and was open defense of their people. It was useless his conversion to Catholicism occurred 10 years earlier. Between 1928 and 1933 gave a series of major conferences on women .Presenting an image of her that was revolutionary for its time. She was convinced that the solution of world problems that women needed to help her grow humanly and spiritually. Urged to promote education based on values for both men and women , since the building society to both compete and to be carried out together. She stressed the need to eliminate discrimination against women in education and to overcome male intellectualism adding to the moral education , training of virtues , the will , feelings and emotions , because, for her, the person mature is one that has integrated all its powers. She continued by stating that women should exercise all professions and enter fully into the world of work because it has the mission to humanize the world by reminding everyone that a human person is worth more than all things, and that any profession, any vocation, any work being the service of mankind. At the beginning of the persecution of the Jews, rejected the possibility of seeking refuge in South America and decided to realize something I wanted for several years, enter the Caramel of Cologne " by the fate of my people, because they foresaw what would happen." She devoted herself to philosophy again and wrote some world-renowned works . In 1938 increased persecution and attacks against Jews in Germany , which fought not even those converted to Christianity. In this situation some friends decided to take it as a precaution to the Caramel of Echt in the Netherlands. It was not enough and, on August 2, 1942 , the Germans imprisoned in retaliation for the attitude of the Netherlands bishops who denounced the violence committed by Hitler 's army and directed primarily at Jews, priests and religious. She was taken to Westernork concentration camp where, according to testimony from survivors , tried to give hope and encouragement to the Jewish prisoners. Shortly afterwards he was transferred to Auschwitz and died in the gas chamber possibly the August 9, 1942.Her name was , Edith Stein , today we recongize her as, St. Teresa Benedicta of the Cross.