The Beheading of Saint John the Baptist 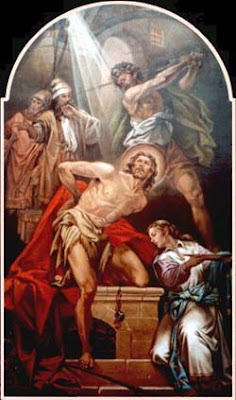 St. Mark 's Gospel tells follows the death of the great forerunner , John the Baptist : "Herod had sent to prisoner John the Baptist, and had been chained to the prison because of Herodias , his brother Philip 's wife With which Herod had gone to live in free union. For John said to Herod, " You are not allowed to go live with the wife of his brother. " Herodias you had a great hatred for this and wanted to Juan Bautista him killed , but could not because Herod had a deep respect for John and consider him a holy man, and protected him and stayed to hear him speak thoughtfully and fearful, and listened with pleasure . "
"But the day came when appropriate, when Herod on his birthday gave a banquet to all the main city . He came to the party and the daughter of Herodias danced the dance she pleased Herod , and promised with an oath : " Ask me what you and I will give , if only half of my kingdom. "

The king was filled with sadness, but not to offend the girl and because it seemed to be satisfied that vain oath, he sent one of his guard to go to jail and bring him the head of John . The other went to prison , cut off his head and brought in a tray and handed to the girl and the girl gave her mother. Upon learning of John's disciples came and they buried him (Mark 6:17) . 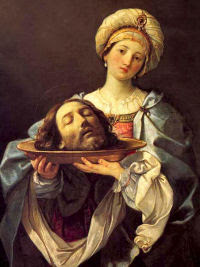 Herod Antipas had committed a sin that shocked the Jews because it is so forbidden by the Holy Bible and the moral law. He had gone to live with the wife of his brother. Juan Bautista denounced him publicly. It takes courage to make a report like this because those kings of the east were very despots and would be killed without further ado who dared to reproach them their mistakes.

Herod at first contented himself put in prison only to John, because he had great respect for him. But the adulterous Herodias was alert to send to kill at the first opportunity that comes before him, to which she told her partner that life was a sin that they were carrying.

When they asked the head of John the Baptist the king felt great sadness because very fond of John and was convinced he was a saint and every time I heard him talk about God and the soul was deeply moved. But do not look bad with his buddies that he had heard his foolish vow (which really could not oblige, because he swears to do something bad, never forces him to accomplish that which is sworn ) and not to displease the wicked , She ordered the holy compound.

This is a typical case of how one sin leads to commit another sin. Herod and Herodias began as adulterous and ended up being murderers. The sin of adultery led to the crime , the murder of a saint.

John died a martyr to his duty because he had read the recommendation that the prophet Isaiah makes the preachers: "Caution: not intended to be mute dogs do not bark when the thieves come to steal. " The Baptist saw the enemy coming to steal the soul 's salvation to Herod and his concubine and spoke loudly. That was his duty. And he had the great joy of dying for proclaiming the need to enforce the laws of God and morality. He was a true martyr.

An ancient tradition says that Herodias years later he was walking on a frozen river and the ice was opened and she was consumed to the neck and closed ice and killed . It may have been true or not . But what is historical is that Herod Antipas after he was banished to a distant country , with his concubine . And the father of his first wife ( to which he had moved away to stay with Herodias ) invaded with the territory of Antipas Nabataeans and made enormous damage. Is there no sin that is without regard to its punishment.