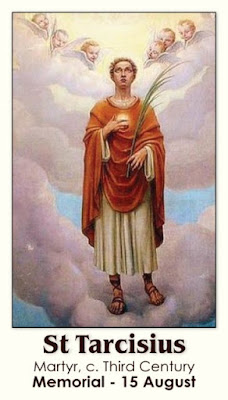 He died a martyr during the persecution of Valerian. His figure of the child hero has encouraged Christian and an example for eighteen centuries generations have been baptized since waking up to the faith. Your generosity in helping others and his willingness to serve, loaded with a generous love for Jesus Christ in the Eucharist have helped the imagination of later believers to renew their devotion to the Blessed Sacrament. Also, seniors have learned from him to live with consistency Eucharistic faith and invigorate the attitudes of adoration and worship that for centuries have practiced the Lord's disciples .

The story of the events with all the features of historical verisimilitude is as follows:

The Christians could not live the faith with external manifestations. They had no right to express the joyous explosion of happiness I had inside by knowing they are children of God with an external worship . It was necessary to hide to worship the one true God as disciples of Jesus Christ , for lack of local comprehensive where they could meet, did the banks of the Tiber, in the cemeteries. Galleries long and very intertwined , from time to time is a lamp which was recalled that the body of a martyr, was the signal lamp . They were well aware of the long corridors and the many twists and turns , there, in a widening have had the good taste to put on a stone inscription and the figure of the shepherd carrying a sheep on his shoulders , and later , in another place , can be seen in rock something that looks like a basket full of loaves and fish are symbols of a history that comes alive every Sunday and gives more life , joy and strength to the disciples of Jesus. Now is a kind of spacious living room, enlarged by the galleries that it converge, where there is a large table covered with very white tablecloths , with lighted candles on a silver candelabra or at least so it seems.

It is a special day. Sixtus is the priest , yea , he was named as successor to Pope Stephen that the pursuers had been killed . All sing psalms , amid a great silence read some passages from the Gospel and make a wise reflection Sixto . Deacon Lorenzo puts bread and wine on the table and the old priest begins the formula of consecration. Before communion every given the kiss of peace.

Shortly before dispersing a remembrance for the incarcerated , these are the confessors of the faith did not want to deny ; love Jesus more than their lives. It is appropriate to pray for them and assist their families in hardship . It is also appropriate to share with you the mysteries to be served with strength in the passion and torment .

Who can and wants to confront the danger? It takes a generous soul. Everybody wants , they ask with eyes: old, mature women and young girls with their faces covered with a veil. Before the new Pope Sixtus a child has reached out , there is some strangeness in the priest who seems to understand so great decision, at first sight absurd . " Why not, Father? No one will suspect with my few years. "

Eucharisted Jesus is wrapped in a thin cloth and placed in the hands of children St. Tarcisius that only eleven years and is well known in the group for their faith and piety , has not been intimidated in the fury of the persecution that saw more than how they killed the night while he was Pope Stephen the mysteries of the Lord.

Between the Tiber malls will as the bearer of Christ , we know a living shrine , is a strange feeling in it , between the joy and pride that I had never experienced. Come in, without saying hello , enraptured with her treasure. Some friends invite you to participate in the game; Tarsicio refuses , they approach him ; Tarsicio push the envelope , you make a fence and get the dreaded question: "What you got there ? We want to see it. " Terrified wants to run, but it's late . Grab him and force to release the bundle that increasingly grips with more determination and strength, buffeted and thrown to the ground , give slaps and kicks but does not want for anything in the world to uncover the Lord , among the insults and threats accompanied of shoving and fists , St. Tarcisius still says " Never, never ! " . One that is near riot group is responsible for the situation and says : "It is a Christian who has spells of prisoners . " Young and old use now, under pretext of curiosity, anger and fury , sticks and stones.

They collected the broken body and buried St. Tarcisius in the catacomb of Callistus .

When persecution came , Pope Damasus ordered to put on his tomb this verse :

" Wanting to St. Tarcisius brutal souls
take the sacrament of Christ ,
chose to deliver his young life
before the heavenly mysteries . "