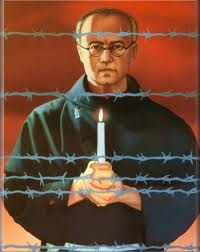 Maximilian Kolbe also known as Maksymilian or Massimiliano Maria Kolbe and “Apostle of Consecration to Mary,” born as Rajmund Kolbe, was a Polish Conventual Franciscan friar who volunteered to die in place of a stranger in the Nazi concentration camp of Auschwitz in Poland.

He was canonized by the Catholic Church as Saint Maximilian Kolbe on October 10, 1982 by Pope John Paul II, and declared a martyr of charity. He is the patron saint of drug addicts, political prisoners, families, journalists, prisoners and the pro-life movement. Pope John Paul II declared him the “The Patron Saint of Our Difficult Century”.

Maximilian Kolbe was born in January 1894 in Zduńska Wola, which was at that time part of Russian Empire. Maximilian was the second son of Julius Kolbe and Maria Dabrowska. His father was an ethnic German and his mother of Polish origins. He had four brothers, Francis, Joseph, Walenty (who lived a year) and Andrew (who lived 4 years). His parents moved to Pabianice where they worked first as basket weavers. Later his mother worked as a midwife (often donating her services), and owned a shop in part of her rented house which sold groceries and household goods. Julius Kolbe worked at the Krushe and Ender Mill and also worked on rented land where he grew vegetables. In 1914 Julius joined Józef Piłsudski’s Polish Legions and was captured by the Russians for fighting for the independence of a partitioned Poland.

In 1907 Kolbe and his elder brother Francis decided to join the Conventual Franciscans. They illegally crossed the border between Russia and Austria-Hungary and joined the Conventual Franciscan junior seminary in Lwów. In 1910 Kolbe was allowed to enter the novitiate. He professed his first vows in 1911, adopting the name Maximilian, and the final vows in 1914, in Rome, adopting the names Maximilian Maria, to show his veneration of the Blessed Virgin Mary.

In 1912 he was sent to Kraków, and in the same year to a college in Rome, where he studied philosophy, theology, mathematics, and physics. He earned a doctorate in philosophy in 1915 at the Pontifical Gregorian University, and the doctorate in theology in 1919 at the Pontifical University of St. Bonaventure. During his time as a student, he witnessed vehement demonstrations against Popes St. Pius X and Benedict XV in Rome and was inspired to organize the Militia Immaculata, or Army of Mary, to work for conversion of sinners and the enemies of the Catholic Church through the intercession of the Virgin Mary. The Immaculata friars utilized the most modern printing and administrative techniques in publishing catechetical and devotional tracts, a daily newspaper with a circulation of 230,000 and a monthly magazine with a circulation of over one million.
In 1918 Kolbe was ordained a priest. In 1919 he returned to the newly independent Poland, where he was very active in promoting the veneration of the Immaculate Virgin Mary, founding and supervising the monastery of Niepokalanów near Warsaw, a seminary, a radio station and several other organizations and publications. Between 1930 and 1936 he took a series of missions to Japan, where he founded a monastery at the outskirts of Nagasaki, a Japanese paper and a seminary. The monastery he founded remains prominent in the Roman Catholic Church in Japan. Kolbe decided to build the monastery on a mountain side that, according to Shinto beliefs, was not the side best suited to be in tune with nature. When the atomic bomb was dropped on Nagasaki, Kolbe’s monastery was saved because the blast of the bomb hit the other side of the mountain, which took the main force of the blast. Had Kolbe built the monastery on the preferred side of mountain as he was advised, his work and all of his fellow monks would have been destroyed. 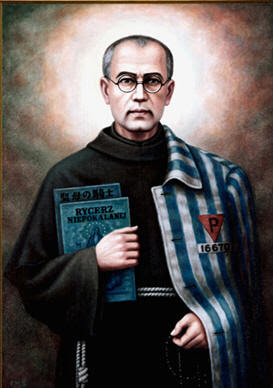 During the Second World War he provided shelter to refugees from Greater Poland, including 2,000 Jews whom he hid from Nazi persecution in his friary in Niepokalanów. He was also active as a radio amateur, with Polish call letters SP3RN, vilifying Nazi activities through his reports.

On February 17, 1941 he was arrested by the German Gestapo and imprisoned in the Pawiak prison, and on May 25 was transferred to Auschwitz I as prisoner #16670.

In July 1941 a man from Kolbe’s barracks vanished, prompting SS-Hauptsturmführer Karl Fritzsch, the deputy camp commander, to pick 10 men from the same barracks to be starved to death in Block 13 (notorious for torture), in order to deter further escape attempts. (The man who had disappeared was later found drowned in the camp latrine.) One of the selected men, Franciszek Gajowniczek, cried out, lamenting his family, and Kolbe volunteered to take his place.

During the time in the cell he led the men in songs and prayer. After three weeks of dehydration and starvation, only Kolbe and three others were still alive. Finally he was murdered with an injection of carbolic acid.

Father Kolbe was beatified as a confessor by Pope Paul VI in 1971 and was canonized by Pope John Paul II on October 10, 1982 in the presence of Franciszek Gajowniczek. Upon canonization, the Pope declared St. Maximilian Kolbe not a confessor, but a martyr.

Although the canonization of St. Maximilan Kolbe is uncontroversial, his recognition as a martyr is, given that a Christian martyr is one who is killed in odium Fidei, and Kolbe wasn’t assassinated strictly out of hatred for the Faith.