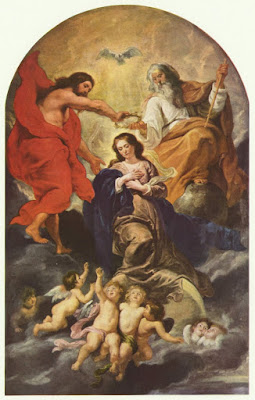 Queenship of Mary is a Marian feast day in the liturgical calendar of the Roman Catholic Church, created by Pope Pius XII. On 11 October 1954, the Pontiff pronounced the new feast in his encyclical Ad caeli reginam. The feast was celebrated on May 31, the last day of the Marian month. In 1969, Pope Paul VI moved the feast day to August 22.

The movement to officially recognise the Queenship of Mary was initially promoted by several Catholic Mariological congresses in Lyon France, Freiburg Germany, and Einsiedeln Switzerland. Gabriel Roschini founded in Rome, Italy, an international society to promote the Queenship of Mary, Pro Regalitate Mariae. Several Popes had described Mary as Queen and Queen of Heaven, which was documented by Gabriel Roschini. Pope Pius XII repeated the title in numerous encyclicals and Apostolic Letters, especially during World War II
August 22. Marian Celebration Queenship of Mary Virgin Mary Queen of heaven and earth