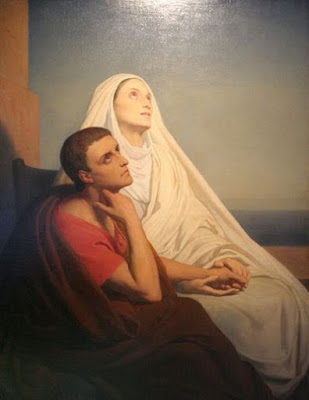 Today we celebrate Santa Monica , whose testimony was able to convert her husband, her mother and her son, St. Augustine , who also is a great saint of the Church.

Santa Monica was a woman of great faith and gave us a testimony of fidelity and trust in God , so who achieved sainthood in keeping with his vocation as wife and mother.

Monica, the mother of St. Augustine , was born in Tagaste (North Africa ) about 100 km from the city of Carthage in 332 .

Her parents entrusted the training of their daughters to a very religious woman and strict discipline. She would not let them drink between meals (though those lands are very hot weather ) because he said: " Now whenever you are thirsty will drink to calm her. And when they are older and have the keys to the room where wine, liquor and this will make them much harm. " Monica obeyed the early years but after elderly , began to go to hidden tank and whenever he was thirsty drank a glass of wine. More happened that one day a worker strongly scolded and shouted it to defend himself Drunk ! This impressed him deeply and he never forgot in his life , and vowed never ever again take alcoholic beverages. A few months later he was baptized (at that time and people baptized in years ) and his conversion from his baptism was admirable.

She wanted to pursue a life of prayer and solitude , but her parents had arranged for handcuffing a man named Patrick. This was a good worker , but terrible temper , as well as a womanizer , gambler and pagan, did not have any taste for the spiritual . He made a lot of suffering and for thirty years she had to put up with his outbursts of anger and crying at the slightest disappointment, but he never dared to raise his hand against it. They had three children: two boys and a girl . The two children were their joy and consolation, but the biggest Augustine , made to suffer for decades.

The formula to avoid confrontation.
In that region of northern Africa where people were very aggressive , the other wives Monica asked him why her husband was one of the worst men of genius in the whole city, but never beat her, and instead of them spouses beat them mercilessly. Monica replied, " is that when my husband is in a bad mood , I strive to be in a good temper. When he cries, I'll shut up . And as for
Monica Santa
It takes two to fight and I fight I do not accept to enter , then .... do not fight . "

Widowed, and a rebellious son

Patrick was not a Catholic , and although much criticized the prayer of his wife and his generosity to the poor so great , never objected to devote their time to this good oficios.y Perhaps the example of his wife's life achievement conversion . Monica prayed and offered sacrifices for her husband and finally reached the grace of God that in the year 371 baptized Patrick did , and that the same did his mother , wife getting terribly angry that too in the home of her daughter had greatly embittered the lives of the poor Monica. A year after his baptism , Patrick died , leaving the widow with the problem of his eldest son.

Patrick and Monica had realized that Augustine was extraordinarily intelligent, and so decided to send him to the state capital to Carthage, to study philosophy , literature and oratory. But Patrick, at the time, was only concerned that Augustine excelled in school, was recognized and celebrated socially and excel in physical exercises . Nothing mattered the spiritual life or lack thereof of his son and Augustine , who was not lazy, went farther and farther away from the faith and falling into more and worse sins and mistakes.

When his father died, Augustine was 17 and Monica began to reach increasingly worrying news of their child's behavior . In a disease , fearing death, was instructed about religion and proposed to be Catholic, but to be healed of the disease left her intention to do so . Adopted beliefs and practices of a Manichaean sect , who claimed that the world had not God but the devil. And Monica, who was kind but not a coward, or weak of character, to turn his son on vacation and alsedades hear arguments against the true religion , he threw no more than the house and locked the doors , because under his roof harbored no enemies of God.

It happened that at that time Monica had a dream in which he was in a forest spirit crying for the loss of his son approached him a very bright and he Dijon your child will return to you "and then saw Augustine with it. He told his son 's dream and he said proudly , that meant that meant that he would return Manichaean like him. To this she replied : " In the dream he told me , the mother will go where the son, but the son returns to the mother. " His answer was very impressed so skilled her son Augustine, who later saw the vision as an inspiration from heaven. This happened in 437 . Still missing for nine years Augustine became .

The famous response of a Bishop

Once Monica was a bishop who had for years and years praying , sacrificing and making friends to pray for priests and for the conversion of Augustine. The bishop replied: "Be quiet , it is impossible to lose the son of so many tears. " This admirable response and what he heard in the dream , gave him comfort and filled with hope, even though Augustine did not give the slightest sign of repentance.

The son fled, and the mother is behind him

At 29 , Augustine decided to go to Rome to teach . It was all a teacher. Monica decides to try to keep away from bad influences but Augustine to reach the port of embarkation , his son by a deception is shipped without it and goes to Rome without it. But Monica did not allow himself to defeat so easily take another boat and go after him.

In Milan , Monica knows the most famous saint of the time in Italy , the famous St. Ambrose , Archbishop of the city. It found a true father , full of kindness and wisdom gave him wise. In addition to Monica, St. Ambrose also had a great impact on Augustine , who was initially attracted by his great knowledge and personal power. Little by little started to operate a marked change in Augustine , listened with great attention and respect to St. Ambrose , he developed a deep affection for him and finally opened his mind and heart to the truths of the Catholic faith.

In the year 387, Augustine's conversion occurred , it was instructed in religion and in the feast of Easter that year was baptized .

You can die in peace

Augustine, and become prepared to return to her mother and brother , their land , Africa, and left the port of Ostia to wait for the boat. But Monica had already achieved everything we want is this life, it was to see the conversion of her son. He could die in peace . And it came to be there in a house by the sea, while mother and son admiring the starry sky and talked about the joys come when you go to heaven , Monica exclaimed enthusiastically : "And to me I'm most tied to the earth? I've God found my great desire, to see Christian. " Soon after he felt a fever, which was aggravated in a few days and killed him . He died at age 55 of 387 .

Throughout the centuries, thousands have been entrusted to Santa Monica 's most beloved family members and have achieved remarkable conversions .

In some piture , is dressed in a nun costume , because of habit and dressed at that time women who were dedicated to the spiritual life , despising vain ornaments and clothing . We also see a walking stick for his many trips after the son of her tears. Others have painted with a book in hand , to commemorate the time for it so desired , the final conversion of his son, when by divine inspiration randomly opened and read one page of the Bible .
Algeria August 27 baptized Christian Easter milan St. Ambrose St. Augustine of Hippo St. Monica of Hippo