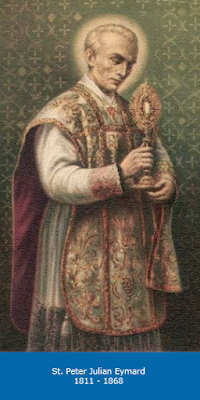 Born in La Mure, in eastern France , where shortly before (1799) had spent the Pope Pius VI prisoner - executive Board of the French republican government since 1795 - giving blessings , and shortly after ( 1815) also passed Napoleon, escaped from the island of Elba, with a triumphant war songs . Peter was the son of a ruined farmer who changed the job of sharpening the street - something one must live -and remarried woman with good people who gave Peter born between siblings. The family does not provide it to perform their religious vocation think they are and are not poor enough for many outlays , which is impossible without the help that the child should report to the family nest egg and say you can also please God without look for extreme situations. Pedro he is stubborn in his desire. A hidden alternates the job of sharpening with occult studies .Fr. Guibert , future Cardinal of Paris, now just a young priest , "has passed through the village where Peter has eighteen years and, knowing the subtleties of Peter and the Virgin Mary , stoked the fire inside providing the boy could enter the novitiate of Mary Immaculate of Marseilles, but illness put him near death and had to return home. Recovered health, finally entered the seminary of Grenoble and was ordained a priest in 1834 . Cure is the people, was in parishes as a curate Chatte as Montereynard rural parish , but is restless , and in constant search of something not yet known . He contacted the Cure of Ars and took root among them a strong friendship. He came to enter the novitiate of the Marist Marseille becoming a member of the Society of Mary do Belley school principal , Provincial Superior , Director of the Third Order of Mary in Marseille, as passions unleashed by the revolt of the first mid-nineteenth century . Exerts an intense and broad apostolate in the city mainly among the prisoners , the sick and workers. With Miss Jaricot founded an institute that would then take the Holy See and the Pontifical Society for the Propagation of the Faith. In an atmosphere imbued with utilitarianism , which seeks to deify reason and anticlericalism that oozes from every pore , reaching to contempt of the supernatural , Peter has called for what the world considers worthless , impractical and own something from another era belonging the decrepit past. Prior consultation with his superiors and the Pope Pius IX then founded the Congregation of the Blessed Sacrament is so continuous and permanent worship the Lord in the Eucharist , this requires having pious priests , full of faith and willing to worship Repair hungry . And it is dedicated . it is difficult not only by the secular environment led from the top of the Empire as a consequence of the Restoration , they also came first the weariness and boredom of those who thought that this was one more thing , probably without much authority passing And then came the misunderstanding of good people, after the terrible and frequent plague among the clergy of jealousy , as is almost always ended in betrayal and slander. But he thinks is needed to instruct Peter, people with true doctrine because ignorance is the chief of the ills that are compromising the faith, piety , Christian life , politics and social life , allowing manipulation of the ignorant. Remember, it is necessary to fill all the pulpits of churches, the Blessed Sacrament out of the tabernacle, but not as a mummy, but alive , risen , present and real. You have to dust off faith in Christ the Savior in the Eucharist ; pilgrim it, burn their energy throughout France , leaving behind associations of priests , religious, lay men and women who have the only purpose of a permanent worship grateful to the Blessed Sacrament. Thus were laid the foundations for future Eucharistic Congresses, the first of which took place in Lille in 1881 , organized by the former religious of the Congregation of the Blessed Sacrament , Miss Tamisier , when he was already in Heaven. His activity was nothing remarkable or surprising , did not carry the mark of the cultural or social edging , incomprehensible , yes, to a world quite nearsighted , but that goes to the core of all other possible and healthy activity because it points out the primacy of order supernatural.