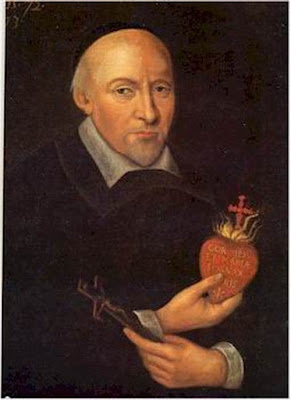 John Eudes was born at Ri, Normandy, France, on November 14, 1601, the son of a farmer. He went to the Jesuit college at Caen when he was 14, and despite his parents' wish that he marry, joined the Congregation of the Oratory of France in 1623. He studied at Paris and at Aubervilliers, was ordained in 1625, and worked as a volunteer, caring for the victims of the plagues that struck Normandy in 1625 and 1631, and spent the next decade giving Missions, building a reputation as an outstanding preacher and confessor and for his opposition to Jansenism. He became interested in helping fallen women, and in 1641, with Madeleine Lamy, founded a refuge for them in Caen under the direction of the Visitandines. He resigned from the Oratorians in 1643 and founded the Congregation of Jesus and Mary (the Eudists) at Caen, composed of secular priests not bound by vows but dedicated to upgrading the clergy by establishing effective seminaries and to preaching missions. His foundation was opposed by the Oratorians and the Jansenists, and he was unable to obtain Papal approval for it, but in 1650, the Bishop of Coutances invited him to establish a seminary in that diocese. The same year the sisters at his refuge in Caen left the Visitandines and were recognized by the Bishop of Bayeux as a new congregation under the name of Sisters of Our Lady of Charity of the Refuge.

John founded seminaries at Lisieux in 1653 and Rouen in 1659 and was unsuccessful in another attempt to secure Papal approval of his congregation, but in 1666 the Refuge sisters received Pope Alexander III's approval as an institute to reclaim and care for penitent wayward women. John continued giving missions and established new seminaries at Evreux in 1666 and Rennes in 1670. He shared with St. Mary Margaret Alacoque the honor of initiating devotion to the Sacred Heart of Jesus (he composed the Mass for the Sacred Heart in 1668) and the Holy Heart of Mary, popularizing the devotions with his "The Devotion to the Adorable Heart of Jesus" (1670) and "The Admirable Heart of the Most Holy Mother of God", which he finished a month before his death at Caen on August 19th. He was canonized in 1925.