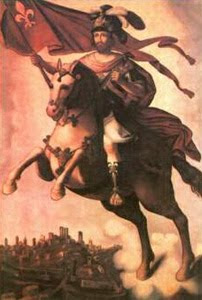 Alexander may simply have been a Roman soldier or resident of Bergamo who was tortured and killed for not renouncing his Christian faith. Details of his life are uncertain, but subsequent Christian legends consider him a centurion of the Theban Legion commanded by Saint Maurice. He was a survivor of the decimation, that is, the killing of every tenth man. He escaped to Milan.

At Milan, he was recognized and imprisoned, and it was demanded that he renounce his Christian faith. However, he was visited in jail by Saint Fidelis and Bishop Saint Maternus. Fidelis managed to organize Alexander's escape. Alexander fled to Como but was captured again.

Brought back to Milan, he was once more condemned to death by decapitation, but during the execution the executioner's arms went stiff. He was imprisoned again, but Alexander once again managed to escape, and ended up in Bergamo after passing through Fara Gera d'Adda and Capriate San Gervasio. At Bergamo, he was the guest of the lord Crotacius, who bid him to hide from his persecutors. However, Alexander decided to become a preacher instead and converted many natives of Bergamo, including Firmus and Rusticus, who were later martyred. Alexander was once again captured and was finally decapitated on August 26, 303, on the spot now occupied by the church of San Alessandro in Colonna
August 26. Italian Martyr Italian Saints persecution Roman Soldier St. Alexander of Bergamo