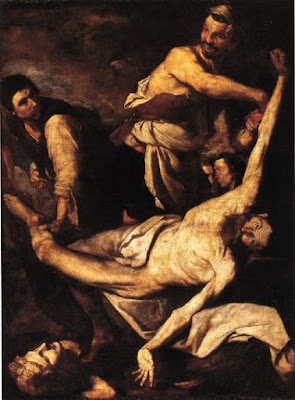 In the East, where Bartholomew's evangelical labours were expended, he was identified with Nathanael, in works by Ebedjesu, the fourteenth century Nestorian metropolitan of Soba, and Elias, the bishop of Damascus. Nathanael is mentioned only in the Gospel according to John. In the Synoptic gospels, Philip and Bartholomew are always mentioned together, while Nathanael is never mentioned; in John's gospel, on the other hand, Philip and Nathanael are similarly mentioned together, but nothing is said of Bartholomew. Giuseppe Simone Assemani specifically remarks, "the Chaldeans confound Bartholomew with Nathaniel". Some Biblical scholars reject this identification, however.

In the Gospel of John,[1:45-51] Nathanael is introduced as a friend of Philip. He is described as initially being skeptical about the Messiah coming from Nazareth, saying: "Can anything good come out of Nazareth?", but nonetheless, follows Philip's invitation. Jesus immediately characterizes him as "Here is a man in whom there is no deception." Some scholars hold that Jesus' quote "Before Philip called you, when you were under the fig tree, I saw you", is based on a Jewish figure of speech referring to studying the Torah. Nathanael recognizes Jesus as "the Son of God" and "the King of Israel". Nathanael reappears at the end of John's gospel[21:2] as one of the disciples to whom Jesus appeared at the Sea of Galilee after the Resurrection.

Eusebius of Caesarea's Ecclesiastical History states that after the Ascension, Bartholomew went on a missionary tour to India, where he left behind a copy of the Gospel of Matthew. Other traditions record him as serving as a missionary in Ethiopia, Mesopotamia, Parthia, and Lycaonia.

Along with his fellow apostle Jude, Bartholomew is reputed to have brought Christianity to Armenia in the 1st century. Thus both saints are considered the patron saints of the Armenian Apostolic Church.

He is said to have been martyred in Albanopolis in Armenia. According to one account, he was beheaded, but a more popular tradition holds that he was flayed alive and crucified, head downward. He is said to have converted Polymius, the king of Armenia, to Christianity. Astyages, Polybius' brother, consequently ordered Bartholemew's execution.
Apostle Martyrs August 24 Jesus' Twelve Apostles martyr St. Bartholomew the Apostle