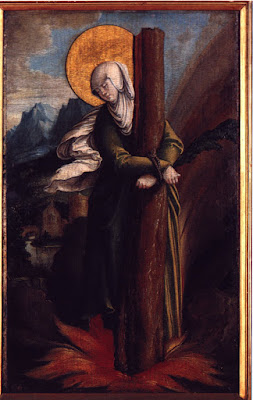 The City of Augusta (now Augsburg ) was situated in the northern part of the Roman Province of Rhtia on the Lech River , not far from its confluence with the Danube . It was an important Roman colony , invested with municipal rights ( municipium ) by Emperor Hadrian , where Christianity had penetrated even before the era of Constantine, as is proved , beyond doubt , the martyrdom of St. Afra . It is an indisputable historical fact that a Christian named Afra was executed in Augsburg during the persecution of Diocletian ( c. 304) by his unshakable faith and profession at an early period her grave was the object of great veneration. The so-called "Martyrologium Hieronymianum "which is a compilation of various calendars and lists of martyrs whose beginnings date from the fourth century, mentions, on 5 August ( in some MSS. , 6 or 7 August) , which suffered in Santa Afra the city of Augsburg and was buried there. In the sixth century in his poem on St. Martin, Venantius Fortunatus , Bishop of Poitiers, also mentions Augsburg as her burial place. In summary is a compilation of two different stories, a history of the conversion of St. Afra , and the other the story of his martyrdom. The origin of the first is after is very likely to contain merely a legendary narrative of the Carolingian era , written with the intention of engaging in St. Afra the organization of the church in Augsburg. Account that the grandparents of Afra came from Cyprus to Augsburg and were there initiated into the worship of the goddess Venus. Afra was given as a prostitute in the service of the goddess by her own mother Hilaria , or spin. During the persecution of Diocletian , Narcissus , Bishop of Gerundum in Spain took refuge from his persecutors in Augsburg and found asylum in Afra 's home . For his efforts , the family converted to Cristianinismo , and were baptized. Al Narciso ordered from presbyter ( or bishop) Hilaria brother named Dionysius . This story of Afra 's martyrdom ends by mentioning that his mother and three daughters of Afra ( Digna, Eunomia or Eumenius and Eutropia or Euprepia ), who after the martyr 's remains were placed in his grave , she also suffered martyrdom being burned . The second part of the "Acts of Afra " , dealing with his trial and death ( Ruinart , Acta Sincerely , 482-484 , Ratisbon , 1859) , is older . Duchesne According to data from the late fourth or early fifth century. It can thus be preserved , not just the fact of martyrdom but also reliable details concerning the Santa and his death. In this narrative Afra just mentioned , and there is no trace of those exaggerations and fantastic embellishments that characterized the later legends of the martyrs .. According to this Passio, Afra (see Acts of the Martyrs ) was sentenced to death by fire because they confessed Christian , and refused to participate in pagan rites. She was executed in the small island in the river Lech and his remains were buried near the site of his death. Fortunatus Venantius 's testimony indicates that his tomb was the object of great veneration in the sixth century. His remains are so far in Augsburg in the church of Saints Ulrich and Afra , beside which stands a famous Benedictine abbey .