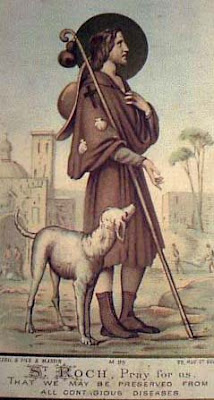 This saint has become famous in the world by getting great favors for poor and sick. Its popularity has been extraordinary when towns or regions have come pests or epidemics, because it gets rid of the disease and spread to many of those who entrust themselves to him. Maybe he can get rid of dangerous epidemics. St. Roch was born in Montpellier , an extremely wealthy family . Killed his parents, he sold all his possessions, divided the money among the poor and went like a poor pilgrim to Rome to visit shrines. And in that time typhus fever broke out and people were dying in droves everywhere. Roch then quit to attend to the most abandoned. A cure many achievements just make the sign of the Holy Cross on his forehead. A good death helped many , and he himself was the grave, because no one dared to approach them for fear of contagion. With all the finest practicing charity. It came to Rome, and in that city was dedicated to serving the most dangerous of the infected . People said to him : "There goes the holy." One day while tending to a seriously ill , he was also the spread of the disease. His body was filled with black spots and ulcers. To not bother anyone , he retired to a lonely wood, and the place where he took refuge, there was born a cistern of clear water, with which he refreshed. It happened that a dog from a major house in the city began to take daily bread on the table of his master and go into the forest to bring it to Roque. After several days of repeating the fact, the landlord became curious , and followed the steps of the dog, until he found the poor waunded man in the forest. Roque then carried home and recovered from his wounds and diseases. Just felt healed ordered back to the holy city of Montpellier. But upon arriving in the city, which was at war , the military mistook him for a spy and jailed. And that was five years in prison , comforting the other prisoners and offering their punishment and humiliation for the salvation of souls. And an August 15 of 1378 , the Feast of the Assumption of the Blessed Virgin, died as a saint. In preparing to throw the coffin discovered in his chest a sign of the cross that her father had little path and realized that he was the son of who had been governor of the city. All the people of Montpellier attended his funeral , and since then started to get God's wonderful miracles and has not failed to get them in bunches in so many centuries. People paint him with his staff and pilgrim's hat , pointing with his hand at one of his wounds and with his dog next to him, offering him bread.