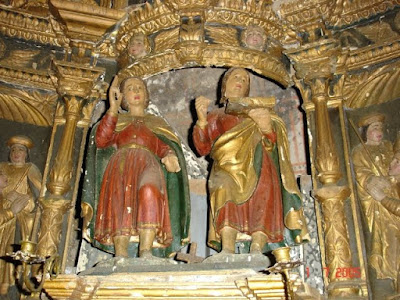 One of the emperors' chief persecutors of Christians in the early years of the 4th century was a man named Dacian, who journeyed through
Spain in a frenzy of violence and terror. In 304, he reached Alcalá, and
proclaimed that all Christians, on pain of death, renounce their faith. Two
schoolboys, Justus (age 13) and Pastor (less than 9), heard of this and
determined to show that their own Christian faith was as strong as that of
any of their elders by publicly reciting their catechism.
Dacian thought it simple to cow schoolboys. He ordered that they both be
savagely flogged. But although the sentence was viciously enacted, neither
flinched. Instead the two boys shouted words of encouragement to each other,
which only whipped their tormentors to further fury.
Dacian was shamed by their bravery. He still wished to have them killed, but
the sentence was carried out secretly. They were beheaded outside Alcalá,
when no one was about, but some fellow−Christians found their bodies and
buried them where they had died.
August 6. Brothers Child martyrs martyrs Patron Saints of Madrid persecution of Diocletian Roman Martyrs Spanish Martyrs