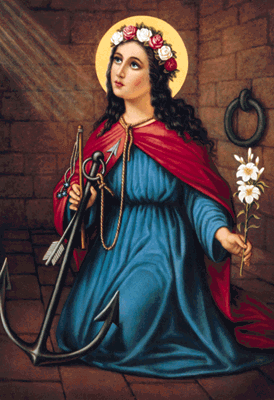 According to history St. Philomena was born January 10, 291 in Corfu, Greece. She was the daughter of a king in Greece who, with his wife had converted to Christianity. Philomena was thirteen she took a vow that she consecrated herself to God as a virgin. When Emperor Diocletian threatened to declare war on her father, he went with his family to Rome to ask for peace. The Emperor fell in love with the young and beautiful Philomena. He proposed that Philomena marry him, but she refused to marry him. After she refused, he subjected her to a series of torments such as scourging, from whose effects two angels cured her; drowning with an anchor attached to her, but two angels cut the rope and raised her to the river bank; being shot with arrows, but on the first occasion her wounds were healed, on the second the arrows turned aside, and on the third, they returned and killed six of the archers, and several of the others became Christians. Finally the Emperor had her decapitated, which occurred on a Friday at three in the afternoon, as with the death of Jesus. The two anchors, three arrows, the palm and the ivy leaf on the tiles found in the tomb were interpreted as symbols of her martyrdom. In these visions she also revealed that her birthday was 10 January, that her martyrdom occurred on 10 August (the date also of the arrival of her relics in Mugnano del Cardinale), and that her name "Filumena" meant "daughter of light". (It is usually taken to be derived from a Greek word meaning "beloved".)