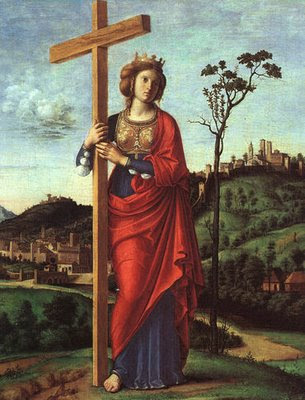 St. Helena was the mother of Constantine the Great. This made her the Queen to the Roman Empire, it was because of Helena that Constantine converted to Christianity and thus creating the Holy Roman Empire. According to St. Ambrose, Helena was an inn-keeper when Constantius lifted her from her lowly position and made her his consort. There exists a legend that she was the daughter of a British king, but there is no historical foundation for this. It is, however, true that Constantius spent some time in Britain putting down a rebellion among the Picts and Scots, and died at York, but it is thought that he had cast off Helena and taken a new wife long before this time. On the death of his father, the young Constantine brought his mother to live at court at Byzantium, the capital of the Eastern Empire. He honored her by giving her the Roman title of Augusta and also had coins struck bearing her image.
Everyone knows the story of Constantine's dramatic conversion. The Church historian, Eusebius, whose
August 18 Byzantium Constantine the Great Holy Roman Empire mother Relics of Jesus Christ Roman Empire St. Helen True Cross of Christ Western Christianity