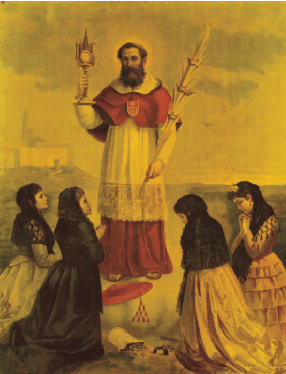 Born in the very beginning of the thirteenth century .

Your name leaves gaping to anyone who hears or reads it first . Nonnatus - Nonnatus however brief , suggests a saint only potential , as if the word were an advertising slogan that was inviting to anyone who reads or hears it decided to start a program that would end the sanctity of the predetermined script . In fact , it means the unborn. " pretend that the strange name , was not born yet the saint who complete the full application of their qualities and virtues, is like expecting the Church to have one it decides when to reproduce ? That would , of course , to confuse holiness as something that springs from the will and human decision when she is actually the result of the action of the Holy Spirit who freely cooperates . It would simply Pelagianism.

The term , which has already become -name Raymond comes to the fact that it was removed from the womb through surgery , when her mother died . Why was not born as children are born normally , he extracted . It was in Portell , Lérida , when initiating the thirteenth century.

The good and high status of his father enabled him to grow in good environment and training, but without the love and care of a mother. Tell of his early youth very special devotion to the Blessed Virgin often led him to visit the shrine of St. Nicholas where he spent times while their flocks grazed . Then his father wanted watching it gradually incorporating the tasks of managing their possessions and that was the reason he is in Barcelona in an attempt to learn letters and numbers. He had the opportunity to make friends with Peter Nolasco , who by then was a merchant , and to share each other 's desires to be faithful to the Christian faith lived in a radical , even to consider entering the clerical state.

As the father enjoys a great practicality, it rejoins the soil of Portell and instruct it to operate several of its farms. But the ancient chronicle goes on to say that the Virgin Mary told him his wish of joining the newly founded Order of Mercy and there is again in Barcelona made available to complete the hands of his friend before Peter Nolasco.

Novitiate , profession, ordination and ministry in the hospital of St. Eulalia is occurring with normal characteristic of those in a hurry to meet the fourth vow of Mercy consisting redeem captives and be held hostage in place if applicable.

In the north of the black continent preaches , comforts , heals , strengthens, and transmits patient attends the captives of the Barbary pirates , well understood the situation and takes care that they are surrounded by all the dangers to their faith. Even he himself had endured imprisonment and torture to seal his lips for eight months with a padlock to prevent him from preaching.

On his return to Spain from the clamor of the crowds, the church appointed Cardinal by Pope Gregory IX , in recognition of his merits and virtue of charity practiced in a heroic manner , but had no time to go to Rome to die before fortieth birthday , he was preparing to do so.

In the effort to take care of your body as much as the friars of Mercy Cardona noble lords , they agreed to bury him wherever he decides a blind mule that carried him to the back who wanted to stand before the church of San Nicolas, Portell .

Gone were the relics for veneration and sunk in 1936.

What has not been relegated to oblivion by his countrymen is the figure of the saint and his charitable work . This devotion is reflected secular parties and even in folklore. Do not say anything about the professional devotion to him all women in labor who have it as a special pattern for trance.

Spread through the world of painting that shows him with his right hand Custody expressing the source of his love to men.

Prayer
Father almighty may the
life of your servant Raymond
be an example of strength so
we can preach the gospel where
ever we go so we to reach heaven like he
did. We ask this through Christ our lord,
AMEN