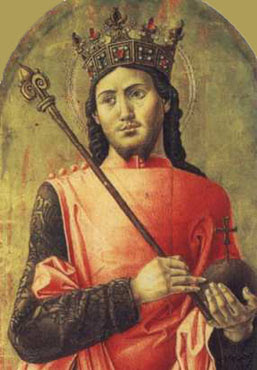 He was born April 25, 1214 Poissy, France. During his second crusade, Louis died at Tunis, 25 August 1270, and was succeeded by his son, Philip III. Louis was traditionally believed to have died from bubonic plague but the cause is thought by modern scholars to have been dysentery. The Bubonic Plague did not strike Europe until 1348, so the likelihood of his contracting and ultimately dying from the Bubonic Plague was very slim. Christian tradition states that some of his entrails were buried directly on the spot in Tunisia, where a Tomb of Saint-Louis can still be visited today, whereas other parts of his entrails were sealed in an urn and placed in the Basilica of Monreale, Palermo, where they still remain. His corpse was taken, after a short stay at the Basilica of Saint Dominic in Bologna, to the French royal necropolis at Saint-Denis, resting in Lyon on the way. His tomb at Saint-Denis was a magnificent gilt brass monument designed in the late 14th century. It was melted down during the French Wars of Religion, at which time the body of the king disappeared. Only one finger was rescued and is kept at Saint-Denis.Pope Boniface VIII proclaimed the canonisation of Louis in 1297; he is the only French monarch to be declared a saint. Louis IX is often considered the model of the ideal Christian monarch. Because of the aura of holiness attached to his memory, many kings of France were called Louis, especially in the Bourbon dynasty, which directly descended from one of his younger sons. The Congregation of the Sisters of Saint Louis is a Roman Catholic religious order founded in 1842 and named in his honour. He is also honoured as co-patron of the Third Order of St. Francis, which claims him as a member of the Order. It is heard he found the Crown of Thorns which was used fir Jesus' Death.