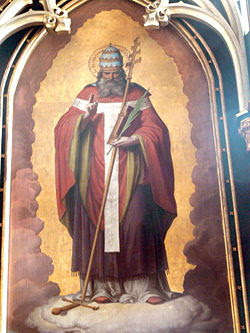 Sixtus was born in Athens. As a deacon of the Roman church , succeeded Pope St. Stephen on the throne of St. Peter for 257 years , during the persecution of Valerian. Sixtus is a graduate of St. Cyprian: peaceful and excellent prelate . And actually a little peace it rushed away, she just was elected to the churches of Rome and Carthage in bitter fighting over the issue of baptism of heretics. (See St. Stephen I). He had a reconciliation with St. Cyprian , but there was no time for further dialogue , then faced a new emergency : Valerian unleashed a second persecution against Christians. They were invited to recant on pain of expropriation of property and decapitation. In late August of 258, St. Cyprian, who would be beheaded on September 14 he wrote to one of his colleagues : " Valerian , in a letter to the Senate, has ordered that bishops , priests and deacons be executed immediately. Before Pope Sixtus died it is said the he gave St. Lawrence of Rome the chalice the Jesus Christ used in the Last Supper. 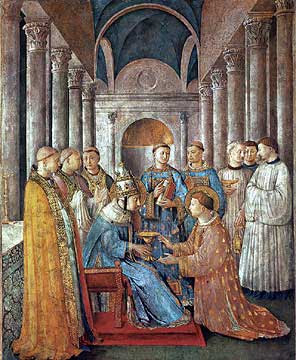 Know that Sixtus has been killed in a cemetery on August 6 , and with him four deacons . " The news was accurate. On 6 August Pope Sixtus II had been arrested in the cemetery of Callistus and beheaded along with the deacons Genaro , Magnus, and Esteban Vicente . Two others, Agapitus Felicissimus and had suffered the same fate in the cemetery next to Praetextatus . We face the most glorious page in the history of the Roman Church during the persecution. Cyprian could rely on this testimony to invite the Christians of Africa "a spiritual struggle : in such a way , "he says - that each of us do not think so much in death as in immortality and consecrated to God all the energies of their faith and their enthusiasm , sit before the joy that fear when a confession, in which soldiers know that God does not receive the death, but rather the crown " (Letter 80). On the right wall of the Crypt of the Popes are preserved , together, two original fragments of the first poem of Damasus, dedicated to Pope Sixtus II to celebrate his glorious martyrdom.


" When the sword (persecution )
the pious heart of Mother (Church )
pierced , the bishop was buried here ( Sixtus II)
doctrine ( the Holy Scriptures ) taught.
suddenly arrive and arrest soldiers
chair to sit in there (the episcopal )
while the faithful offered their necks to watch sent (ie, trying to save the Pope at the expense of his life.)
Just the elder ( bishop)
learned that one wanted to snatch the palm ( of martyrdom )
he was the first to volunteer and give his head to the sword , so that could hurt any one so impatient anger (pagan ).
Christ distributed the prizes of life, acknowledged the merit of the pastor , defending himself the rest of his flock . "