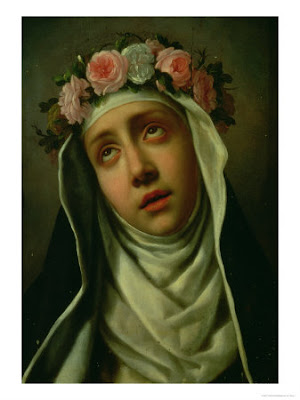 Santa Rosa de Lima was born on April 20 1586, in Peru. Her father was Spanish businessman Gaspar de Flores and her mother, Maria d'Olivia, was a mestiza of Spanish and Incan ancestry. She was baptized as Isabel de Herrara.

The infant Isabel was first baptized at home because of her poor health at birth. Eventually she was baptized at the church of San Sebastian. Isabel's complexion and features were both a problem and source of praise. The praise caused her name to be casually changed to Rose over the years, eventually becoming her name at her confirmation ceremony in 1597. Some say her face was transformed as a child when exposed to a mystical rose. But the praise and concentration on her extreme beauty vexed Rose throughout her life. She feared that the praise would make her proud and be a source of distraction to those who should be thinking of God, including herself.

Over the years, she used mortification to refocus herself on God and remove distractions. This process that often includes pain is common among mystics and ascetics of various religions, but is in no way encouraged by the Church.

Rose modeled herself after St. Catherine of Siena. Both St. Rose and St. Catherine experienced an overwhelming love when in the presence of the Blessed Sacrament. Her parents, who lost much of their wealth in a failed mining venture, looked forward to seeing their daughter's love placed in a marriage. To make herself less attractive to suitors, she rubbed very hot peppers into her face to change her complexion and smoothness of her skin. When someone complimented her on her hands, it is said she filled them with hot lime. She used many methods to fight any source of vanity or any temptation to give her life to anyone but God.

With her family fortune lost, she helped support the household by selling her embroidery. She lived in a small home in the garden that her brother built for her. There she spent nights in prayer and penance and hours meditating in devotion before the Blessed Mother and Christ. After experiencing vast desolation in her spirit and still receiving temptations, she took more extreme measures to stay focused. Throughout her life, she cut her hair, wore coarse closing and worked to keep her hands rough through labor.

As a final solution to the temptation of marriage, St Rose joined the Third Order of St. Dominic. She wore the modest clothes of the order and took an eternal vow of chastity. Joining a Third Order showed she was willing to still recognize her love and respect for her parent's wishes. It allowed her to work as a member of the church, while still living at home with her family.

This dedication also marked the beginning of an increase in her penance. She wore a metal spiked crown on her head, which was covered by roses and an iron chain around her waist. Her fasting became more frequent and her sleep less frequent. Her diet included only what she saw as the bare essentials, usually including only coarse foods and never including meat. She sometimes only drank water with bitter herbs as sustenance, other times her only meal was the Holy Communion. Even in her weakened state, she wouldn't be comforted by recovery. The bed she made for herself was made of broken glass, thorns and stone.

While her body was suffering, her spiritual consolation was raised. She often experienced the revelations of God, which left her in a state of ecstasy for hours.

In her final days, at the age of 31, she prayed through her pain, "Lord, increase my sufferings, and with them increase Your love in my heart."

After her death on August 30, 1617, her life beyond her problems of beauty and pain became more obvious to the world. Massive crowds attended her funeral, preventing the burial rite and usual burial of the body. Throughout her life, she offered much charity, time and energy to the poorest people in Lima. She had advocated for the indigenous who lived in poverty while the gold they mined was shipped to enrich the Spanish kingdom. Eventually her body rested in a Dominican convent. Later, it was moved to a special chapel in the church of San Domingo, where it exists today.

Her death was soon followed by many conversions and miracles attributed to her intercession. Pope Clement canonized her in 1671, assigning August 30 as her feast day. She is also celebrated on August 23rd. She was the first canonized Saint to be born n the Americas.
August 23. dominican nun incorruptable Latin American Saints mystic pretty girl St. Rosa de Lima stigmatic Virgin