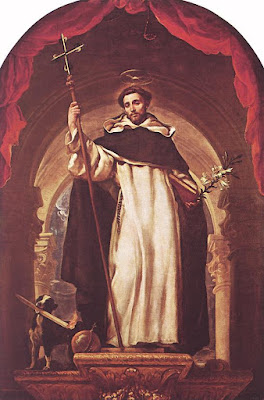 The Dominicans are now celebrating. St. Dominic de Guzmán founded in the thirteenth century. For so many years have done and are doing a great service to the Church throughout the world. The founder of the Dominican fathers, who are now 6,800 in 680 houses in the world , was born in Caleruega , Spain, in 1171. His mother , Joan of Aza, was an admirable woman in virtues and has been declared Blessed . He was educated in strict religious training. At age 14 he went to live with an uncle, a priest in Palencia , in whose house he worked and studied. People said that age was a kid but that serious like an old man . His special joy was to read religious books, and give charity to the poor. At that time the region came a famine and people have begged for help to survive . St. Dominic de Guzmán distributed at home all I had and even furniture. Then, when he had nothing more to do to help the hungry, sold what he loved and appreciated , his books (at that time were copied by hand and very expensive and very difficult to find) and the sale price helped the needy. To those who criticized him for this generosity, he said: " We can not have Christ to suffer hunger in the poor, while I keep in my house something which could rescue them ." On a trip he made, he accompanied his bishop to the south of France , he realized that the heretics had taken over entire regions and were doing a great evil souls. And the method that Catholic missionaries were using was totally inadequate . The preachers came in elegant carriages , with aides and secretaries , and stayed at the best hotels , and his life was certainly not the best model of holiness. And thus the conversion of heretics who succeeded , was minimal. St. Dominic de Guzmán proposed a completely different mission mode. He saw that people were impressed that the missionary was poor as the people . To live a life real good example in everything. And involved with all his energies to teaching the true religion. He got a group of friends and a life of total poverty, and an awesome holiness of conduct , began to evangelize with great success apostolic. Their weapons were to turn prayer , patience , penance, and many hours dedicated to educating the ignorant in religion. When some Catholics tried to kill heretics by force of arms , or frighten them to become , he said : "It is useless to try to convert people to violence . Prayer over the effect that all warlike weapons . Do not think that listeners will return c_onMover and better because we are very smartly dressed . In contrast with the humility it is win hearts. " St. Dominic de Guzmán was already ten years preaching in southern France and converting heretics and fervent Catholics, and had gathered around a group of preachers that he had been arranging and teaching the best way possible. Then he thought of them form a community of monks , accompanied by his bishop consulted Pope Innocent III. At first the Pope was doubtful whether or not to grant permission to found the new religious community . But they say that in a dream saw the church building was swaying and in danger of collapsing and that came two men , St. Dominic de Guzmán and Saint Francis of Assisi , and I put the shoulder and back up again. After this vision, the Pope had no doubt that it should adopt the ideas of our saint. And they have the ancient traditions that St. Dominic de Guzmán was in a dream that the wrath of God was sending judgments upon the world , but the Blessed Virgin Mary pointed to two men who with their works were to intercede with God and calmed . The one was St. Dominic de Guzmán and the other was a stranger , dressed almost like a beggar. And the next day while praying in the temple was to get to who dressed like a beggar, and was none other than St. Francis of Assisi. 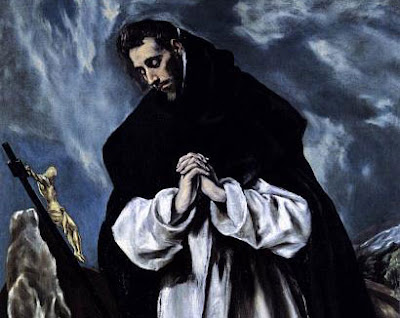 Our holy hugged him and said : "We both have to work closely together to achieve the Kingdom of God. " And has been for centuries the beautiful custom of each year, the feast day of San Francisco, the Dominican fathers go to the convents of the Franciscans and celebrate with them very fraternal party, and the day of the feast of Santo Sunday , parents go to the Franciscan convent of the Dominicans and together make a joyful celebration of good brothers. In August 1216 St. Dominic founded his community of preachers , with 16 colleagues who loved him and obeyed him as the best of fathers . Eight were French , seven Spanish and one English . The prepared in the best way he could and sent them to preach , and the new community was a blessing from God so great that a few years and the convents of the Dominicans were over seventy , and became famous in large universities, especially in Paris and in Bologna. The great founder gave his religious rules that they have done immense good for many centuries. For example these:
First look at , then teach. That is, before devoting much time and effort to study and meditate on the teachings of Jesus Christ and his Church , and then devote themselves to preach with all the enthusiasm possible. Preach always and everywhere. St. Dominic de Guzmán wants the job is paramount to his religious preaching , teaching catechism, trying to spread Catholic teachings by all possible means. And he himself gave the example used wherever it came most of his time in preaching and teaching catechism. Experience had shown that souls are won to charity. So every day asking the Lord 's grace to grow in love toward God and love toward others and have a great desire to save souls. It also recommended his disciples to ask God constantly. The Saints have dominated her body with a mortification that in many cases are more to admire than to imitate. Remember some of those that made this man of God. Each year made several Lents , or several seasons spent 40 days fasting on bread and water. Always slept on hard boards. He walked barefoot iridescent stone paths and trails covered with snow. Do not put anything in your head or to defend against the sun, or for shelter against rain. Endured the most terrible insults without replying a single word . When arriving from a trip by the terrible downpours soaked while the others were near the fire to warm a bit , the saint went to the temple to pray. One day when the enemies of revenge made to walk barefoot along a road with too many sharp stones , the saint exclaimed, "the next sermon will be very fruitful , because we've won with these sufferings. " And that really happened . He suffered from many diseases, but yet they were preaching and teaching catechism without getting tired or showing despair. He was the man of joy and good humor. People always saw him with a happy face , joyful and kind. His companions said : "By day one more talkative and cheerful. At night , no one more devoted to prayer and meditation. " He spent whole nights in prayer. It was of few words when talking about mundane topics , but when it came to talking about our Lord and religious issues then I talked with real enthusiasm. His favorite books were the Gospel of St. Matthew and the Letters of St. Paul. Always carried with him to read day by day and almost knew them by heart . To his disciples he recommended that no day pass without reading a page of the New Testament or Old. Those who dealt with him said they were confident that this holy baptismal innocence preserved forever and ever he did not commit a grave sin. Totally worn out from working so hard and sacrifice for the Kingdom of God in early August 1221 he was lacking in strength, while in Bologna , the city where he had lived his last years. They had to pay because he had a mattress . And the August 6, 1221 , while he prayed the prayers for the dying when he said : "Let all the angels and saints come out to meet you " , said: " How beautiful , how beautiful ! " and expired. In the 13 years since his death , Pope Gregory IX declared him a saint and said to proclaim the decree of canonization: " In the sanctity of this man I'm so sure, and the sanctity of St. Peter and St. Paul." 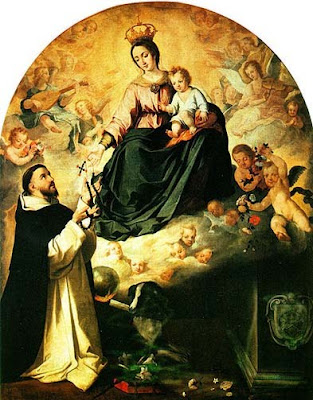