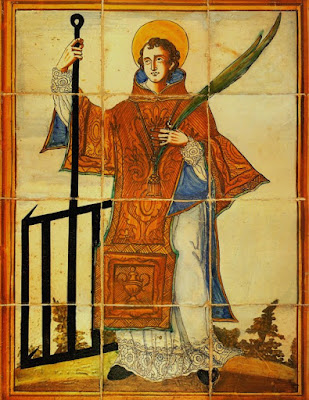 Lawrence was born in Huesca, Spain which is located in what is now known as Northern Aragon. Lawrence spent most of his life in Huesca and recieved religious guidance from local priests and deacons. Until he was brought to Rome by Pope Sixtus II, who at the time was the Archdeacon of Rome. When Sixtus was ordained Bishop of Rome, Pope, Lawrence was ordained a deacon in 257. Sixtus then stationed him as the first Archivist of the Catholic Church.
And under his job he had to take care of the holiest chalice known to Christians everywhere, he was given the Holy Grail so he could keep it far away for the Persecution of Christians under Valerian was starting to heat up. Lawrence sent the Chalice away to Huesca with a letter to his parents to give it to a Monk who was a friend of Lawrence and the family. The Chalice was taken to the monastery where it remained hidden for centuries, and many believe that the Chalice is now in the Cathedral of Valencia.

In the persecutions under Valerian in 258 A.D., numerous priests and deacons were put to death, while Christians belonging to the nobility or the Roman Senate were deprived of their goods and exiled. Pope Sixtus II was one of the first victims of this persecution, being beheaded on August 6. A legend cited by St Ambrose of Milan says that Lawrence met the Pope on his way to his execution, where he is reported to have said, "Where are you going, my dear father, without your son? Where are you hurrying off to, holy priest, without your deacon? Before you never mounted the altar of sacrifice without your servant, and now you wish to do it without me?" The Pope is reported to have prophesied that "after three days you will follow me". 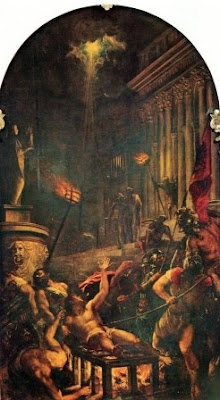 After the death of Sixtus, the prefect of Rome demanded that Lawrence turn over the riches of the Church. Ambrose is the earliest source for the tale that Lawrence asked for three days to gather together the wealth. Lawrence worked swiftly to distribute as much Church property to the poor as possible, so as to prevent its being seized by the prefect. On the third day, at the head of a small delegation, he presented himself to the prefect, and when ordered to give up the treasures of the Church, he presented the poor, the crippled, the blind and the suffering, and said that these were the true treasures of the Church. One account records him declaring to the prefect, "The Church is truly rich, far richer than your emperor." This act of defiance led directly to his martyrdom. Lawrence is said to have been martyred on a gridiron as a part of Valerian's persecution. During his torture Lawrence cried out "This side’s done, turn me over and have a bite."
August 10 burned on the gridiron Deacon Huesca Italian Martyrs Lorenzo de Roma martyr Persecution of Valerian. Pope Sixtus II Saint Lawrence of Rome Spain Spanish Martyrs Vatican