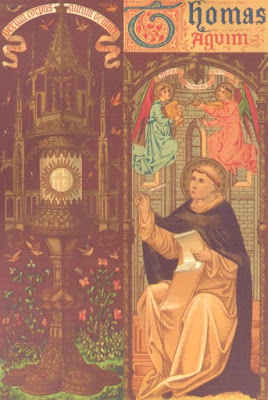 Thomas was born in Roccasecca, Kingdom of Sicily in the year 1225. He was born into the Italian Nobility and was destend to be a Count as his father had been. Thomas was a well eduacted young man, that at the age of five he was taught at Monte Cassino but after the military conflict between Pope Gregory IX and Emperor Fredrick II. After this his mother, Theodora Countess of Theate, enrolled him at Studium Generale , in Naples, which would now relate to the University. Here is where St. Thomas learned about Aristotle and the many other great philosophers who influenced his philosophy. It was also during his study at Naples that Aquinas came under the influence of John of St. Julian, a Dominican preacher in Naples, who was part of the active effort by the Dominican order to recruit devout followers. Here his teacher in arithmetic, geometry, astronomy, and music was Petrus de Ibernia. In the year 1244, Thomas decided that he was going to join the Dominican Order. Thomas' family was not very happy when they heard the news about his change in career path. According to legend, by the orders of his mother Thomas' brothers tried to abduct him as he was drinking from a spring in a nearby village, their attempt was successful and he was tempted by local girls his mother had convinced to meet him. Family members became desperate to dissuade Aquinas, who remained determined to join the Dominicans. At one point, two of his brothers hired a prostitute to seduce him, but he drove her away, wielding a burning stick. According to legend, that night two angels appeared to him as he slept and strengthened his determination to remain celibate. As a reward for his fidelity, God conferred upon him the gift of perfect chastity, which has merited for him the title of the "Angelic Doctor" 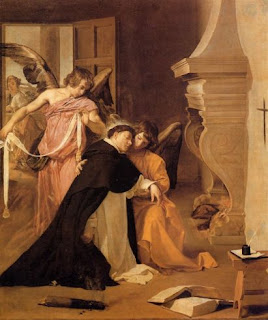 . After this attempt failed which lasted two years, his mother noticed that his heart truly did belong to GOD and she then supported him through out his religious life. During his time in captivity he spent most of his days, educating his sisters in the faith and speaking with some Dominican Friars. After his liberation Aquinas was sent first to Naples and then to Rome to meet Johannes von Wildeshausen, the Master General of the Dominican Order. In 1245, Aquinas was sent to study at the University of Paris' Faculty of Arts, where it is said that he met Albertus Magnus. When the new university was opened in Cologne, Germany wher Albertus was appointed, it is said that Thomas followed him there too. Here he was nicknamed the "dumb ox" because of his silent ways and huge size, but he was really a brilliant student. At the age of twenty-two, he was appointed to teach in the same city. At the same time, he also began to publish his first works. After four years he was sent to Paris. The saint was then a priest. At the age of thirty-one, he received his doctorate. At Paris he was honored with the friendship of the King, St. Louis, with whom he frequently dined. In 1261, Urban IV called him to Rome where he was appointed to teach, but he positively declined to accept any ecclesiastical dignity. St. Thomas not only wrote (his writings filled twenty hefty tomes characterized by brilliance of thought and lucidity of language), but he preached often and with greatest fruit. Clement IV offered him the archbishopric of Naples which he also refused. He left the great monument of his learning, the "Summa Theologica", unfinished, for on his way to the second Council of Lyons, ordered there by Gregory X, he fell sick and died at the Cistercian monastery of Fossa Nuova in 1274.

PRAYER
God our Father,
you made Thomas Aquinas known for his holiness and learning.
Help us to grow in wisdom by his teaching
and in holiness by imitating his faith.
May we too be guided by the Holy Spirit, as he was.
We ask this through Christ our Lord.
AMEN.
Angelic Doctor Count of Roccasecca Doctor of the Church Holy Spirit January 28. St. Thomas Aquinas Summa Teologica Temptation of St. Thomas Theologian