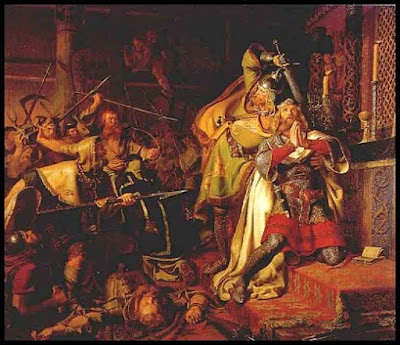 Canute IV the Saint reigned in Denmark from 1080 until his assassination in 1086. It was the natural son of Sven II King of England. He succeeded his brother Harald III Hen.
From Young highlighted the best qualities in him to fight and has appreciated gifts of conqueror. Fight against pirates who destroy the shores of the kingdom and gets clean seas out victorious in the bloody wars against the pagan Wends. It grows more and more esteem among the people. But the death of his father usurped the throne by his brother Harald because the nobility prefer a weak and foolish king, who dies within two years. That's when Canute becomes king, running the year 1080.
It strives to restore morality as it has found a kingdom that still suffers the pitfalls of paganism. Purge the people of defects and disorders. Wars against Estonia and Denmark added to the territories of Courland and Samogitia. It seems that not by ambition but by pity, indeed, immediately sends missionaries to evangelize the inhabitants of these lands.
As often happens in a king, married Adela, daughter of Robert, Count of Flanders, who had Charles the Good.
It has things in the kingdom with human laws, wise and prudent. Does for the poor, built hospitals, their treasure is for the poor. Promotes the mission of the Church with the construction of temples and monasteries sponsoring.
Precisely the question of tithes to the noble repels him. Try to uproot the people the habit of giving only the sins of the clergy the cause of the calamities that periodically afflict the people, diseases, disasters and all kinds of natural disturbances.
For their part, adopting attitudes penitential. It has a great pity that it takes to bring after invading England, the relics of St. Albans. Among all the religious attitudes highlights his love and veneration for the Eucharist. Honestly can put at the feet of Christ crucified his sword, crown and regalia and does!
It is betrayed by his brother Olaus. One day when attending Mass in Odense on the island of Funen and the church of St. Albans, accompanied by some loyalists, rebels led by Blacon surrounding the church. After confession and communion, his martyrdom was being shot with arrows, forgiving his enemies. It was a January 10, 1087. He was canonized and proclaimed the first saint of Denmark by the year 1,100. Pope Clement X recognizes their worship for the whole Church.
In our time may seem strange figure of a saint rude, quarrelsome, invading foreign lands and ruthlessly demanding. It seems to convince more goodness to the poor, their compassion for the weak, his piety and penance. But he did what he could to be loyal to himself, good to his people and faithful to the Church. That was what he called the century of iron, the dark barbaric and turbulent time.

PRAYER
Eternal and almighty God
may the martyrdom of Canute
helpus love you so much we
can die defending the name
of Jesus.
AMEN