Agnes was born into a family of Christians and Roman Nobles in the year 291. Agnes was raised Christian and had a huge love for Christ and God. Agnes was a beautiful, wealthy Roman maiden who had, in childhood, dedicated herself to God. Though at the age of 13 the Prefect Sempronius went to ask for her hand in marriage for one of his sons. Agnes refused and was condemned to death due to her refusal. But due to Roman Law, it was not allowed to kill Virgins, then the Prefect stripped her and dragged her all the way to a brothel. 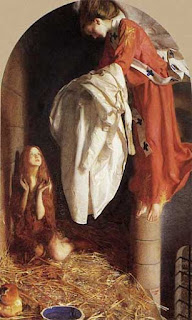 As she was being dragged to said place she never stopped praying. Along the way her hair grew and grew until it covered up her body, in order for no one to see her body. When they arrived at the brothel, there were already men ready to rape her, but as they were getting close to her they all went blind. After she this she was taken and tied to the stake. The soldiers prepared everything and lit the firewood under her feet, but the hay and the wood would not light. Then one of the soldiers charged towards her and stabbed her in the throat, as Agnes' blood poured on the floor of the stadium, it is said to have been soaked up on cloths by early Christians. St. Agnes was later put in a Catacomb in Rome where later on her major shrine was erected. St. Agnes is always depicted with a lamb that symbolizes purity and is also closely related to meaning of Agnes in latin.

Prayer to St. Agnes of Rome
O glorious St. Agnes, you served God in humility and confidence on earth and are now in the enjoyment of His beatific Vision in heaven because you persevered till death and gained the crown of eternal life. Remember now the dangers that surround me in the vale of tears, and intercede for me in my needs and troubles.
Amen.
catacombs in rome Child martyr January 21. Killed at the stake Lamb love for God and Christ martyr November 29. sainthood purity St. Agnes of Rome Virgin