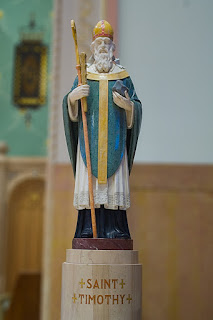 St. Timothy
Born at Lystra, Lycaenia, Timothy was the son of a Greek father and Eunice, a converted Jewess. He joined St. Paul when Paul preached at Lystra replacing Barnabas, and became Paul's close friend and confidant. Paul allowed him to be circumcised to placate the Jews, since he was the son of a Jewess, and he then accompanied Paul on his second missionary journey. When Paul was forced to flee Berea because of the enmity of the Jews there, Timothy remained, but after a time was sent to Thessalonica to report on the condition of the Christians there and to encourage them under persecution, a report that led to Paul's first letter to the Thessalonians when he joined Timothy at Corinth. Timothy and Erastus were sent to Macedonia in 58, went to Corinth to remind the Corinthians of Paul's teaching, and then accompanied Paul into Macedonia and Achaia. Timothy was probably with Paul when the Apostle was imprisoned at Caesarea and then Rome, and was himself imprisoned but then freed. According to tradition, he went to Ephesus, became its first bishop, and was stoned to death there when he opposed the pagan festival of Katagogian in honor of Diana. Paul wrote two letters to Timothy, one written about 65 from Macedonia and the second from Rome while he was in prison awaiting execution. 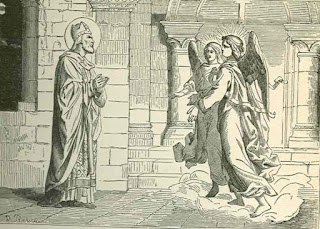 Titus was a convert from heathenism, a disciple of St. Paul, one of the chosen companions of the Apostle in his journey to the Council of Jerusalem, and his fellow-laborer in many apostolic missions. From the second epistle which St. Paul sent by the hand of Titus to the Corinthians we gain an insight into his character, and understand the strong affection which his master bore him. Titus had been commissioned to carry out a two-fold office, needing much firmness, discretion, and charity. He was to be the bearer of a severe rebuke to the Corinthians, who were giving scandal and wavering in their faith; and at the same time he was to put their charity to a further test by calling upon them for abundant alms for the church at Jerusalem. St. Paul meanwhile anxiously awaited the result. At Troas he writes, "I had no rest in my spirit, because I found not Titus, my brother." He set sail to Macedonia. Here at last Titus brought the good news. His success had been complete. He reported the sorrow, the zeal, the generosity of the Corinthians, till the Apostle could not contain his joy, and sent back to them his faithful messenger with the letter of comfort from which we have quoted. Titus was finally left as a bishop in Crete, and here he in turn received the epistle which bears his name, and here at last he died in peace.
The mission of Titus to Corinth shows us how well the disciple caught the spirit of his Master. He knew how to be firm and to inspire respect. The Corinthians, we are told, "received him with fear and trembling." He was patient and painstaking. St. Paul "gave thanks to God who had put such carefulness for them in the heart of Titus." And these gifts were enhanced by a quickness to detect and call out all that was good in others, and by a joyousness which overflowed upon the spirit of St Paul himself, who "abundantly rejoiced in the joy of Titus."

PRAYER
God our Father,
you gave your saints Timothy and Titus
the courage and wisdom of the apostles:
may their prayers help us to live holy lives
and lead us to heaven, our true home.
Grant this through our Lord Jesus Christ, your Son,
who lives and reigns with you and the Holy Spirit,
one God, forever and ever.
AMEN.
Apostles of St. Paul Bishop January 26 Letters of Paul Ss. Timothy and Titus. St. Timothy St. Titus