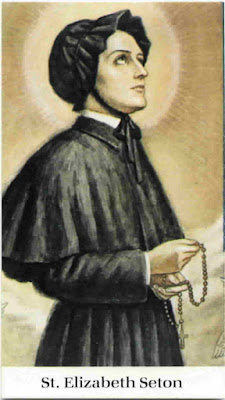 Elizabeth Ann born in New York on August 28, 1774. It grows within the Episcopal Church.
William Seton married her at the age of twenty years and comes to have five children. On December 27, 1803 she was widowed.
Years later, on March 14, 1805 embraces Catholicism, which causes it multiple tests, both internal and external, coming from relatives and friends. All overcomes with faith, love and courage.
Applied regularly to the spiritual life. Educate your children to request and, eager to indulge in the charitable and educational activity.
In 1809 the diocese of Baltimore founded the Institute of Sisters of Charity of St. Joseph, renewing the saga of St. Vincent de Paul and St. Louise de Marillac. This Institute aims at the training of girls. It is the first female religious congregation in North America.
After her death the sisters joined the Society of the Daughters of Charity in Paris, as was her desire from the beginning.
She also founded the first Catholic parochial school in America.
Mercifully dies in Emmitsburg, Maryland, on 4 January 1821. Her beatification takes place on 17 March 1963, under Pope John XXIII. On 14 September 1975 she was canonized by Pope Paul VI.
Two major issues marked his spiritual life: faithfulness to the Church and the eternity of glory.
She is the first saint of the United States of America.

Prayer
Father we ask you to help
us find our faith in you so we to can love
you like Elizabeth Ann Seton did
may she be our example to love you more
every day of our life.
We ask this through Christ our Lord.
AMEN