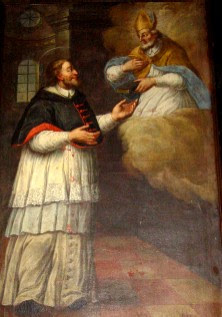 Martin was a Canon Regular of the Augustinian Order. After the death of his mother, his father, Juan, decided to join the catholic Canonry at St. Marcellinus in León. Martin was educated and raised at the Canonry, and after the death of his father he decieded to go on a major pilgramage to many Italian cities and Constantinople.
After he returned to Spain he decieded to take the habit of the Augustinian order, at St. Marcellinus, but after seeing this monastery had been secularized by the bishops he entered the collegiate church of St. Isidore in the same city. Martin distinguished himself by his zealous observance, his charity, and his deep devotion to the Blessed Sacrament. The religious of St. Isidore's dedicated a chapel to Martin very early and celebrated his feast each year. St. Martin wrote many commentaries to the Epistles and on the Book of Revelations. St. Martin has left full class discussions which are stored and were published by Espinosa in Seville.

PRAYER
Lord you let your beloved son Martin find refuge in you after he became an orphan, let us also run to you at every point in our lives. Give us your undying love in every moment of our lives. Bless us in the name of Jesus Christ through whom all good things come from.
AMEN.
Augustinian Monk Canonry January 12 orphan Regular Canon saint. Sainthood Spain St. Martin of Leon