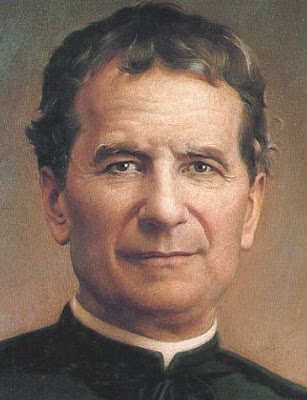 St. John Bosco was born on 16 August 1815 at Castelnuovo d'Asti, and received from his mother Margarita Occhiena a solid Christian and human education. Endowed with intelligence, memory, will and physical agility uncommon since childhood was followed by his contemporaries, who organized games that broke the sound of the bells to bring them to church. He was ordained priest in Turin in 1841, where he began his pastoral work with St. Joseph Cafasso.
His program, or rather, his passion was the education of youth, the poor and abandoned. He gathered a small group that had to play, to pray often to dine with him. The uncomfortable and noisy company of Don Bosco (as it was called and took him familiarly called) had to be continually changing places until I finally found a permanent place under the shed Pinardi, which was the first cell of the Oratory.One of the boys who was with John Bosco was St. Dominic Savio. They had a strong friendship. Until Dominic died.

With the help of mum Margaret, without material and between the persistent hostility of many, gave birth to the Don Bosco Oratory of St. Francis de Sales was the Sunday meeting place for young people wishing to spend a day of good cheer, a pension with schools of art and crafts for young workers, and regular schools to the humanities, as a pedagogy that would become known worldwide as "precautionary approach" and based on religion, reason and love. "The practice of preventive method is based entirely in the words of St. Paul who says:" Charity is kind and patient, suffering everything, but expects everything and hold everything. "
To ensure continuity of his work, St. John Bosco founded the Pious Society of St. Francis de Sales (Salesians) and FMA (the Salesians). He was a prolific popular writer, founded schools typefaces, magazines and publishers for the increase of the Catholic press, "good news". Although alien to the political struggles, he lent his services as an intermediary between the Holy See, the Italian government and the House of Savoy.
It was a cheerful and amiable saint, was "a priest in the poor house, a priest in the palace of the King and the Ministers". Good debater against the sect of the Vaudois, in the mind of the time, never been shy about his friendships with Protestants and Jews of good will: "We condemn the errors, wrote in the" Catholic ", but always respect the people" . St. John Bosco died on January 31, 1888 and was canonized by Pius XI in 1934.

Prayer
Lord,
you called John Bosco
to be a teacher and father yo the young.
Fill us with love like his:
may we give ourselves completely your service
and to the salvation of mankind.
We ask this through Jesus Christ our
Lord.
AMEN