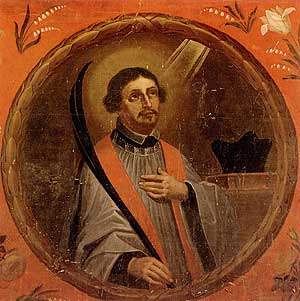 Felix was the son of Hermias, a Syrian who had been a Roman soldier. He was born on his father's estate at Nola near Naples, Italy. On the death of his father, Felix distributed his inheritance to the poor, was ordained by Bishop St. Maximus of Nola, and became his assistant. When Maximus fled to the desert at the beginning of Decius' persecution of the Christians in 250, Felix was seized in his stead and imprisoned. He was reputedly released from prison by an angel, who directed him to the ailing Maximus, whom he brought back to Nola. Even after Decius' death in 251, Felix was a hunted man but kept well hidden until the persecution ended. When Maximus died, the people unanimously selected Felix as their Bishop, but he declined the honor in favor of Quintus, a senior priest. Felix spent the rest of his life on a small piece of land sharing what he had with the poor, and died there on January 14. His tomb soon became famous for the miracles reported there, and when St. Paulinus became bishop of Nola almost a century later, he wrote about his predecessor, the source of our information about him, adding legendary material that had grown up about Felix in the intervening century. His feast day is January 14th.

Prayer
Eternal and ever living God may we carry the memory of your beloved son Felix in our hearts and use his testimony of humility in our everyday life. May we gain a bountyful blessing and a humble heart as we go through life. We ask this through your faithful servant St. Felix of Nola and with Christ our Lord.
AMEN.
Bishop Maximus of Nola Decius persecution holy grave January 14. loving towards the community martyrdom retriever St. Felix of Nola