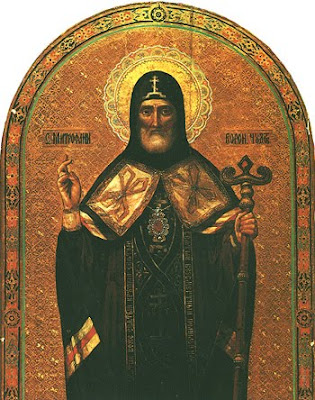 Macario was born in upper Egypt, around 300, and spent his youth as a shepherd. Driven by an intense grace, retired from an early age, confined to a narrow cell where he divided his time between prayer, penitential practices and the manufacture of mats. A woman falsely accused him that he had attempted to do violence. As a result, Macario was dragged through the streets, beaten and treated as hypocritical disguised as a monk. All suffered with patience, and even sent the woman the product of his work, saying: "Macario, now you have to work harder, because you have to hold to another." But God made known his innocence: the woman who had slandered him could not give birth until they revealed the name of the father of the child. This brings the fury of the people turned to admiration for the humility and patience of a saint. To escape the esteem of men, Macario took refuge in the vast desert Scete melancholy, when I was about thirty years. Here he lived sixty years and was the spiritual father of countless servants of God who were entrusted to his direction and ruled their lives with the rules he drew them. They all lived in separate shrines. Only a disciple of Macarius lived with him and was responsible for greeting visitors. An Egyptian bishop Macarius ordered that he receive the ordination so he could celebrate the divine mysteries to his hermit. Later, when multiplied hermits, were built four churches, attended by as many priests.
The austerities of Macano were amazing. Ate only once a week. On one occasion, his disciple Evagrius saw him tortured by thirst, begged her to take some water, but merely Macario rest briefly in the shade, saying: "In these twenty years, I have never eaten, drunk, or slept enough to suit my nature. " His body was weak and trembling, his face pale. To counter their inclinations, it refused to drink some wine, when others asked for it, but then abstained from every drink for two or three days. In view of this, his disciples decided to prevent the visitors offered him wine. Macario a few words in his advice, and recommended the silence, withdrawal and continued prayer, especially the latter-to all sorts of people. He used to say: "In prayer there is no need to say many things or use words chosen. Simply repeating sincerely, Lord, give thanks that You know I need. Or, God help me." His gentleness and patience were extraordinary, and managed the conversion of a pagan priest and many others. Macario ordered a young man who asked his advice to go to a graveyard to insult the dead and praise. When he returned the young man, Macarius asked what the deceased had responded. "The dead did not answer my calling, nor my praise" she told the young man. "Well, - he advised Macario -, do the same and do not be impressed either by the insult, nor praise. Just dying for the world and for yourself, you will begin to serve Christ." Another told her: "He is ready to receive God's hand of poverty, as cheerfully as the abundance and master your passions and conquer the devil." As a monk complained that the loneliness suffered great temptation to break the fast while in the monastery stand him joyfully, Macario said: "Fasting is nice when others see, but it is very hard when it is hidden to the gaze of men. " A hermit who suffered from strong temptations to impurity, went to see Macario. The saint, after reviewing the case, reached the conviction that the temptations were due to the indolence of the hermit thus advised not to eat ever before sunset, to surrender to contemplation at work and to work incessantly. The other followed this advice and was freed from his temptations. God revealed to Macarius was not as perfect as two married women who lived in the city. The saint went to visit them to find the means used to sanctify themselves and found that they never said no rough idle words, living in humility, patience and love, fitting the mood of their husbands and all their actions sanctified by prayer, consecrated to the glory of God all his bodily and spiritual forces.
A heretic in the hieracitas sect, who denied the resurrection of the dead, was disturbed in several Christian faith. Sozomeno, Palladius and Rufinus that St. Macarius tell a dead man raised to confirm these Christians in their faith. According to Cassian, the saint simply do talk to the dead and ordered him to await the resurrection in the tomb. Lucius, Arian bishop who had usurped the See of Alexandria, sent troops into the desert to disperse the pious monks, some of which are sealed with their blood the testimony of their faith. The main ascetics. Isidoro, Pambo, the two Macarious and some others were banished to a small island in the Nile Delta, surrounded by swamps. The example and preaching of God's men turned the inhabitants of the island, who were pagans. Lucio subsequently authorized the monks to return to their cells. Feeling that his end was approaching, Macario he visited Nitria monks and urged them, in words so heartfelt, that they knelt at his feet crying. "Yes, brothers, - he said Macario -, let our eyes shed streams of tears in this life, not to go to the place where tears fuel the fire of torture". Macario was called by God to ninety years, having spent sixty in the desert of Scete. According to the testimony of Casiano, Macario was the first anchorite of this vast desert. Some argue that he was a disciple of St. Anthony, who lived about fifteen days' journey from the site where he was Macario.

PRAYER
Father may the life and death
of your hermit Macarius of Egypt
help us mission to those who
need to tought by the word
of Christ so they to can spread
his word around the world.
We ask this through Christ our
Lord.
AMEN