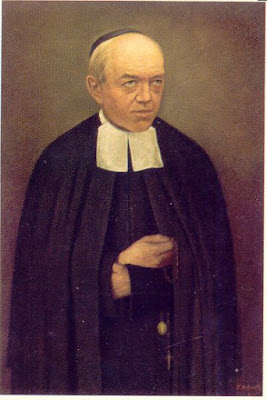 Saint Mutien-Marie Wiaux was a Belgian member of the Brothers of Christian Schools. He was born Louis Wiaux, the third of six children, in French-speaking Belgium to a devout Catholic family. After joining the Christian Brothers, he took the religious name Mutien-Marie, "Mutien" being a reference to the early Roman martyr Mucian. He began the novitiate at Namur.
After teaching at an elementary school, he was assigned to teach at a boarding school, where he taught fine arts, including music and art, for fifty-eight years. At first teaching was a difficult assignment for him, and his students were known as disruptive and out of control. But in time Brother Mutien grew into an effective teacher also known for his patience and piety. He taught music and art, a saint of sensibility not intellect.
Mutien-Marie was buried in Malonne. His fame began to grow after his death and miracles were attributed to him.

Prayer
Lord bless us with the memory of your humble servant Mutien-Marie, so that we too may live a life of love for you and our Lord Jesus Christ.
Amen.
Belgium January 30. Pope John Paul II Sainthood St.Mutien-Marie