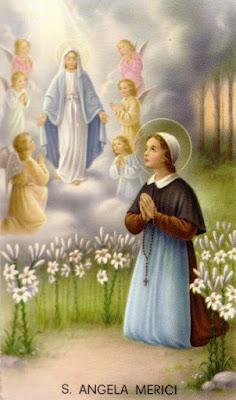 Born in Italy in 1474 and is credited with having founded the first female religious community to educate girls.
She grew up in a peasant family in a believer, where every night reading the life of a saint, and that the aroused much and excited by religion.
Lost her father and mother while still very young and it impressed her very much. After all her life she would ask God for forgiveness for not trusting enough in her youth in Divine Providence that no one leaves.
Her childhood is very patient and has to work hard but that makes it strong and makes sympathetic to poor girls who need help in order to be adequately instructed.
Franciscan Tertiary and is made without having primary school but, becomes Minister of governors, bishops,doctors of the church,and priests. It had received the Holy Spirit the gift of the Council, which consists of knowing what is best to do and avoid each time.
Seeing that the girls who were not educated and free her from mortal danger, and that theories were new people to want to organize their lives as if God did not exist, he founded the Community of the Ursulines (in honor of St. Ursula, the fourth-century martyred saint, who headed the group of girls called "The eleven thousand virgins, who died defending their religion and chastity).
What struck her most was that girls in the countryside and villages he visited knew nothing or almost nothing about religion. Her parents or did not know or would not teach them catechism. So she organized her friends into an association dedicated to teaching catechism in every neighborhood and every village.
Angela was short but had all the qualities of leadership and guidance to influence others. And he was very sympathetic and kind in their treatment.
In Brescia founded a school and from there spread its Ursuline Community of many parts. A group of 28 very pious girls came to live at home with Angela and they founded the Community. In a vision she saw a huge group of young girls dressed in
Angela de Merici, Saint
white flying into the sky and a voice said: "These are your religious educators.
The Saint Ursula people considered as a great leader or guide for women. So Angela began her religious name Ursulines.
The Community of Ursuline was founded in 1535 and died five years after its founder, St. Angela, on January 27, 1540. She was canonized in 1807.
A man asked her one day on the street: What advice do you recommend to behave properly? And she said: "Behave every day as I wanted to have behaved when the time comes to die and give account to God."
Her last words were: "My God, I love you". 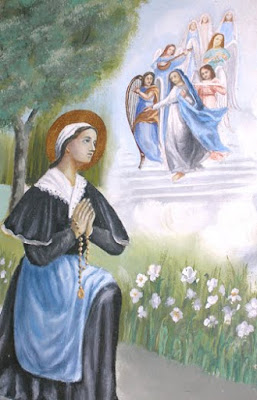 Prayer
Lord,
may Saint Angela commend us to your mercy;
may her chairity and wisdom help us
to be faithful to your teaching
and to follow it in our lives.
AMEN