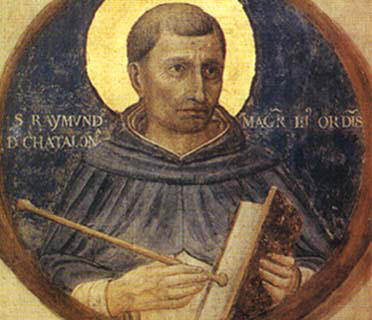 St. Raymond of Pennafort, Patron Saint of Canonists Born in Spain. St. Raymond was a relative of the King of Aragon. From childhood he had a tender love and devotion to the Blessed Mother. He finished his studies at an early age, and became a famous teacher. He then gave up all his honors and entered the Order of the Dominicans. St. Raymond was very humble and very close to God. He did much penance and was so good and kind that he won many sinners to God. With King James of Aragon and St. Peter Nolasco he founded the Order of Our Lady of Ransom. The brave religious of this Order devoted themselves to saving poor Christians captured by the Moors.
Also Raymond decided to make converting the Jews and the Muslims towards Christianity.
Once he went with King James to the Island of Majorca to preach about Jesus. King James was a man of great qualities, but he let himself be ruled by passions. There on the Island, too, he was giving bad example. The Saint commanded him to send the woman away. The King said he would, but he did not keep his promise. So St. Raymond decided to leave the Island. The King declared he would punish any ship captain who brought the Saint back to Barcelona. Putting all his trust in God, Saint Raymond spread his cloak upon the water, tied up one corner of it to a stick for a sail, made the Sign of the Cross, stepped onto the cloak, and sailed along for six hours until he reached Barcelona. This miracle moved the King. He was sorry for what he had done, and he became a true follower of St. Raymond. St. Raymond was one hundred years old at the time of his death.

Prayer
Lord you gave us the memory of St. Raymond of Pennafort,
may we ask for his intercession so that we too may enter into the eternal kingdom.
May his blessings come upon us so that we may live as long as he did proclaiming your divine word.
AMEN.
100 years old Barcelona Catalonia Dominican Friar January 7. Saint Spain St. Raymond of Penafort