The Epiphany of Our Lord Jesus Christ 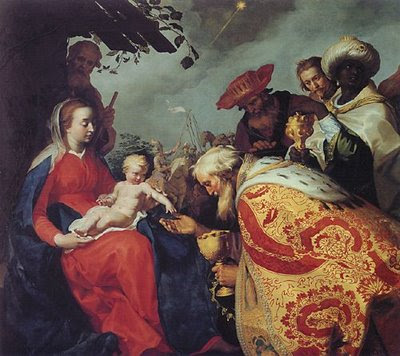 With the shepherds spent a few days ago an unusual event that turned out well. Tended their herds to meet its tough job so strange when they saw a clear vision of angels as they were told at first incomprehensible things and soon established. Yes, there, in a CASUCO, was the Child of which he spoke with his mother and a boy. They did what they could in their crudeness and lack commanded by the circumstances. As I was assured it was the "light that illuminated the people who lived in the shadow of death" of what they gave to help and to look good with that family that seemed to be poorer than them. It was hard for them to accept the miracle that was so clear. The angels said, because ... were right.
The Three Wise Men came about. They were the last to arrive to see if that Child and entertain a little more ... because you can not find it! Roads traveled widely around the world. They came from far away. It took fear, cold and heat. Until they were lost but, wondering and inquiring, they took the fruit of his research. That was a relief because they had the scare of losing time and having to return to the beginning to failure in their real fronts. But I knew that that star was able to take them where God was. He also commanded the circumstances and worshiped and how not to! offered gifts to the Child-Creator.
Both are roads, faith and reason. One is simple, just speaking God. The other is expensive, constant and sincere search with dangers of misunderstanding. The Truth is in place. Simplicity is a prerequisite. The shepherds and the wise men apprehend discovered. Both of the serve and both are of God.

PRAYER
God may the Epiphany of
Your Son Jesus help us
give him more by going to
your temple the Holy Catholic Church.
AMEN