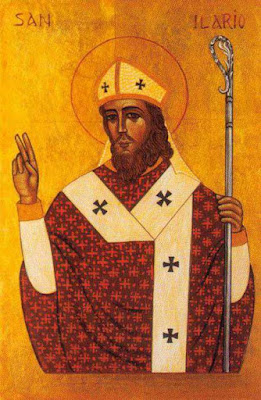 Born in the early fourth century Poitiers. It was called the "Athanasius of the West", who was a contemporary. Both had to fight against the same opponent, Arianism. Participated in the theological polemics with speeches and especially writing. Hilary was exiled to Phrygia by the Emperor Constantine, who had aligned with the decisions of the Arian synod of Béziers in the year 356.
Contact with the Orient was providential for the bishop of Poitiers. During the five years spent in Phrygia learned and discovered Greek origins, as also the great theological production of the Eastern Fathers, obtaining an important documentation for the book that earned him the title of Doctor of the Church: On the Trinity, whose title De Fide adversus original Arians. It was the most important and profound treatise which had appeared previously on the main tenet of the Christian faith. Despite being banished, not inactive. With the booklet Maxertiam Against Constantius himself violently attacked, accusing him of meddling in Caesaropapism and theological disputes and internal affairs of church discipline. Back in Poitiers, the brave bishop continued his pastoral work, effectively helped by the young St.Martin of Tours, the future saint bishop of Tours.
Hilary was born into paganism. His eagerness to seek the truth led him to study various philosophical currents of the time, getting a special influx of Neoplatonic thought. The search for the answer on the end of man led him to reading the Bible, where he finally found what he wanted, then he converted to Christianity.
It was a noble landowner, and when he became was married and had a daughter, Opens, whom he loved dearly. Shortly after the baptism, the people hailed him as bishop of his hometown.
It took six years of intense study and preaching, before leaving for exile, as we have pointed out, refined its cultural and theological training. Along with the booming voice of a debater and defender of theological orthodoxy, there is also another voice, that of father and pastor. Human struggle, and most human in the victory. He defended the bishops who recognized his mistake, and even supported the right to retain his seat.
Poitiers died in AD 367.

PRAYER
Father may the life of your
bishop Hilary help us
proclaim your holy word
to the ignorant. So they too
can love you.
We ask this through Christ
our Lord.
AMEN