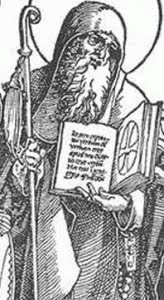 During the V century the Western Roman Empire was gradually invaded by the Visigoths, Ostrogoths, Vandals, Franks, etc.. In the devastation only the authorities and Christian structures were a strong point for survival. This is the historical context in which it presents the figure and work of San Severino, who was born of a noble Roman family around the year 410. After a stay in the East, to 454 was established near the Danube, where he built monasteries to house and threatened the residents at the same time points of irradiation were the Gospel among the barbarian tribes.
Therefore inclined to the contemplative life as a hermit and missionary activity, and helped with the charism of prophecy, San Severino also made estimates of the temporal human level. It realized that the youth movement was unstoppable barbarians and the decadent Roman society regain its strength thanks to these new forces.
But it was necessary that those minds were enlightened by the truths of the Gospel, and guidance was to come into direct contact with them. With a bold gesture that earned him the admiration of the rude warriors, reached Comag already in hand of their enemies, their particular charity for the needy will finally conquered the simple heart of the "barbarians", starting with the heads . Gibuldo, king of the Alamanni, he had "great reverence and affection," says his biographer Eugipo, and listened with respect, docile as a child; Flaciteo, king of the Rough, "in business consulting him as a dangerous heavenly oracle.
There was no shortage signs of heaven which confirmed his words. One day the daughter of Flaciteo, against the advice of Severino, had convinced him not to give them freedom to prisoners; Severino and strongly admonished night Flaciteo's nephew was captured by another barbarian tribe and was freed only by Severino intervention.
Respected and loved by the common people as kings and warriors, lived very poorly, fails to draw any material advantage to himself, wearing the same coat in winter and summer, slept a few hours lying on the ground and with sackcloth, and Lent is said to eat only once a week.
He died on 8 January in the year 482. His venerated relics lie in Frattamaggiore (Naples) along the martyr Sosso. St. Severinus was the childhood guardian and spiritual father of St. Anthony the Hermit. St. Severinus was a Benedictine. 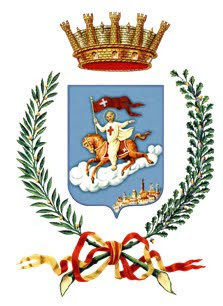 On the left of this text is the coat of arms of St. Severinus

PRAYER
Father we ask you to bless
us so we to can preach the
holy gospel like your servant
St. Severinus.
We ask this through Christ our Lord.
AMEN