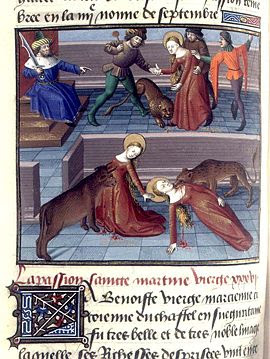 Saint Marciana, originating "Rusuccur (now Tigzirt) in Mauritania, left all the advantages valiantly attempting to go to the world locked in a cell in Caesarea and keep her virginity intact, under the gaze of God.
However, she believed it was their duty to declare war on idolatry that then reigned in Africa. One day, in crossing the public square, could not bear to see displayed a statue of Diana and broke his head.
The arrested, beaten with rods, and then condemned her to die in the amphitheater, torn by the teeth of wild beasts. As expected this last punishment, handed it to the gladiators for violating her chastity, but God did not allow this outrage.
At the date of execution, Marciana was exposed first to a lion who did not do any harm, then a bull pounced on her and thrust his horns into the chest, which fell face down on the floor, almost without sense. Finally, a leopard and tore this torment expired.
The manuscripts of the Acts do not agree on the date of martyrdom, January 9. Baronius, in his notes to the Roman Martyrology, estimates that on July 12 marks a translation of relics and Jan. 9, the anniversary of martyrdom. On July 12 the Martyrology mentions a Martian holy virgin and martyr, in Toledo. Baronius thinks that this is Martian Mauritania holy, venerated in Toledo. In the Mozarabic breviary is a beautiful hymn in his honor.

PRAYER
God may the crown of martyrdom of your
child St. Marciana help us defend
your holy name so we to can love
you like St. Marciana did so
we to can die loving you
like Christ loved us.
AMEN