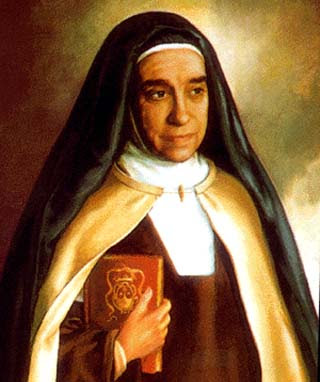 Born in Madrid on 4 November 1891. From his childhood he wished to devote himself to God and devoted his youth to help the needy. Attracted by the spirituality of St. Teresa of Avila and St. John of the Cross, and moved by his love for the Virgin Mary, entered the Caramel of El Escorial on October 12, 1919.
In 1924 he founded a monastery of Carmelite nuns in El Cerro de los Angeles, the geographical center of the peninsula, near the monument of the Sacred Heart, as a place of prayer and sacrifice for the Church and Spain.
During the religious persecution Mother Maravillas was noted for its spirit of reparation, strength, serenity and trust in the Lord. Under the sign of fidelity to Santa Teresa founded ten places Carmels recovering Teresa and John of the Cross tradition. Prioress for many years, taught his sisters testified about their virtues and distinguished himself by his mystical life, apostolic zeal and kindness combined with firmness against those who had the real mother. He died at the Caramel of The Aldehuela, 11 December 1974, expressing "What happiness to die Carmelita!".
She was beatified by your Holiness on 10 May 1998.
Canonized by Pope John Paul II on May 4, 2003.

Prayer
Father may the spirit of your
daughter Saint María Maravillas de Jesús
be helpfuk to us so we can get closer
your son Jesus Christ who we ask to hear are
prayer.
AMEN