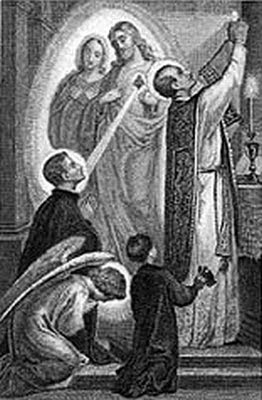 Saint Peter Kanijs born in Nijmegen, the Netherlands, in 1521, and may be defined as a hierrro placed between the anvil, ie white irritation raised his clear preaching in Protestant circles, and the malevolence that I tried envy among them fellow religion. Son of the mayor of Nijmegen, Pedro Kanijs, Latin Canicius, was able to attend excellent schools: canon law and civil law at Louvain in Cologne.
In this city liked to spend free time in the monastery of the Carthusians. No one suspected that the young lawyer, whom the father had secured support in his profession, take a hair shirt under her dress. Reading the brief treatise on the Spiritual Exercises, had recently written to San Ignacio, determined the turning point of his life: the pious practice ended in Mainz under the direction of Father Faber, entered the Society of Jesus and was the eighth Jesuit in solemn vows. The young congregation was able to cultivate their favorite studies and their love of learning, to Him we owe the publication of the works of St. Cyril of Alexandria, St. Leo the Great, St. Jerome and Osio de Córdoba.
He lived in the very climate of reform and counter. He actively participated in
Peter Canisius, Saint
the Council of Trent as theologian of Cardinal Truchsess and adviser of the Pope. He was distinguished by the depth of his theological, for his zeal and activity, but also by the spirit concialiador. St. Ignatius called him to Italy, then sent to Sicily to found the first of the famous colleges, then to Bologna to teach theology to resubmitting to Germany, where for thirty years, as provincial superior, spent his best energies in as difficult a time characterized by the breakdown of the Protestant church. He rightly called second apostle of Germany (the first was St. Boniface).
As a writer not only devoted to works of scholarship, but also and especially the catechetical, tailoring teaching to the capacity of small and large. St. Pius V offered him a cardinal, but Peter Canisius 1e asked the Pope to let him in his humble service to the community, spending their time in prayer and penance. He died in Freiburg (Switzerland) on 21 December 1597. In 1925 he was canonized and declared a Doctor of the Church.

PRAYER
Almighty and Eternal God
we ask you that the life
of servant Peter help us
understand that we can get closer to you
through the Eucharist.
We ask this through Christ our LOrd.
AMEN