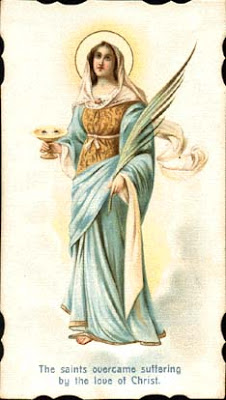 St.Lucy was born in Sicily 283 AD.Lucy was a beautiful rich virgin.Lucy had a many young men who wanted to marry her.Lucy denied them because she took the vows of virginity.One day one young man saw her and asked to marry him.She denied him.He got frustrated at her and accused her of being Catholic.In 304 the emperor tried to make her denounce her faith.But she would always say "Long Live Christ the King and the Holy Spirit." So he asked her "Is the holy spirit in you?" She responded "Those who's hearts are pure are the temples of the Holy Spirit." The emperor was furious and told her furiously "Well I will make you fall in to the hands of sin and the Holy Spirit will abandon you." She responded again saying "I will never happen because the Holy Spirit will protect me." But nothing could make her sin. She said to them "Do you not see I am the temple of the Holy Spirit and that he protects me?" The emperor had her eyes taken out but GOD healed her. The emperor asked to burn her on the stake but she did not burn.At last he had her stabbed once the sword past through her heart she did not die until a priest brought the Eucharist to her. She died after she received communion.She died 304 AD in Sicily. 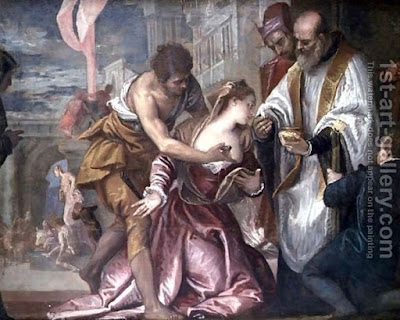 PRAYER
Father almighty may the crown
of martyrdom and blood of Saint Lucy
be a seed for us to grow in faith in
you so we can get closer to your holy church.
We ask this through Christ our lord.
AMEN
blind emperor Eucharist God HolySpirit Italy Malta martyr martyrdom Priest Sicily Sin stabbed stake throat infections