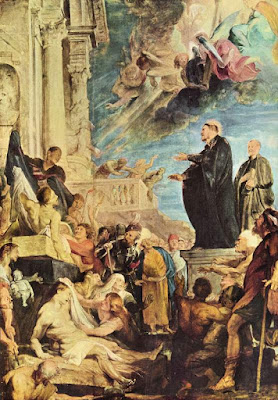 Francis Xavier wasborn in the castle of Xavier in Spain on April 7 1506, corresponding to the expectations of his parents, graduated from the famous university of Paris. During these years he was fortunate to live side by side, sharing a room including the pension, with Peter Faber, who will be like a Jesuit and then blessed him, and with a strange student, quite late in life to sit on the benches of school, called Ignatius.
Ignatius understood very well that soul: "A big heart and a soul so noble," he said "can not be satisfied with the ephemeral earthly honors. Your ambition should be the glory that shines forever. " The Feast of the Assumption, 1534, in the crypt of the church of Montmartre, Francis Xavier, Ignatius Loyola and five colleagues were consecrated to God by vow of absolute poverty, and decided to go to the Holy Land from there to begin his missionary work , putting the total dependence of the Pope.
Ordained priests in Venice and abandoned the perspective of the Holy Land, set out for Rome, where Francis worked with Ignacio in the drafting of the Constitutions of the Society of Jesus. However, it was at 35 years old when he began his great missionary adventure. At the invitation of the king of Portugal, was chosen as a missionary and papal delegate to the Portuguese colonies in the East Indies. Goa was the center of intense missionary activity, which is radiated by such a vast area that today would be exceptional even with the current social media: in ten years he toured India, Malaysia, the Moluccas and the islands still wild state. "I can not find a boat, go swimming," said Francisco, and then said: "If in these islands had gold mines, rush Christians there. But there is nothing but to save souls. "
After four years of missionary activity in these islands, separated from the civilized world, embarked on a rustic boat to Japan, where, among immense difficulties, he formed the first center for Christians. His zeal knew no rest: since Japan was already looking toward China. He sailed again and arrived in Singapore was 150 kilometers from Guangzhou, the great Chinese port. On the island of Shangchuan, waiting for a boat to take him to China, became seriously ill. He died at the lake on 3 December 1552, at 46 years old.
He was canonized on March 12, 1622 along with Ignatius of Loyola, Felipe Neri,Teresa de Jesus and the saint of Madrid, Isidro. Good group of Spanish quartet and solo italiano!
Is patron of the missions in East and shares the universal patronage of the Catholic missions with Therese of Lisieux. He is one of the incorruptables.

Prayer
Father you gave us Francis Xavier
to spread your holy word around the
world.May we go and spread your holy
word to those that do not see the
truth.We ask this through Christ Our Lord
AMEN