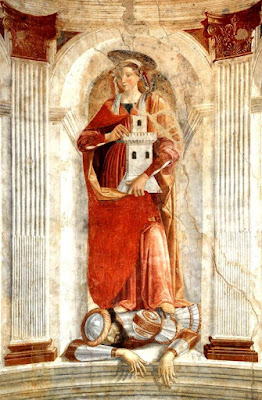 Saint Barbara was from Heliopolis of Phoenicia and lived during the reign of Maximian, during the third century. The daughter of a wealthy, pagan idolater named Dioscorus; she was raised in the belief of polytheism.
Highly intelligent and extremely beautiful, St. Barbara was ordered to live her life imprisoned in the tower by her jealous father. Vowing to protect her from the outside world, he forbade her association with friends and St. Barbara only came in contact with teachers and servants who had been carefully instructed that she be taught how to worship the pagan gods.
One day, as her father was leaving for a business trip, he ordered a bathhouse be built for Saint Barbara. He gave specific instructions for the design of the building, commanding the workers to install only two windows. Having learned about the teachings of Christ, St. Barbara’s belief in Christianity became firm. During her father’s absence she instructed the workmen to install three windows to symbolize the Holy Trinity.
When Dioscorus returned, he was enraged at the changes and infuriated with St. Barbara when she confessed that she was a Christian. He took her before the prefect of the province, who decreed she be tortured and beheaded, as was the punishment for Christians during this time. It was Dioscorus who rendered the death sentence to St. Barbara. On his way home, he was struck by lightning and killed instantly.
It is because of this legend of Saint Barbara that she came to be known as Saint Barbara the saint of danger from thunderstorms, fires and sudden death. When gunpowder was introduced in the Western world, Saint Barbara was invoked for protection against explosion and soon was regarded as the patroness of the artillerymen.
Saint Barbara's Execution
Who is Saint Barbara? She is the patron saint of firefighters, sailors, artillerymen and anyone who is in danger of sudden death. A young virgin who chose a violent death rather than deny Christ; she is a saint in the highest tradition.
St. Barbara's name can be invoked on any occasion with the assurance that her virtue will protect us from evil of all forms.

Prayer
Saint Barbara, your courage is much stronger than the forces of hurricanes and the power of lightening. Be always by our side so that we, like you, may face all storms, wars, trials and tribulations with the same fortitude with which you faced yours. O Beautiful Maiden once imprisoned in a high tower, protect us from the lightning and fire that rages in the sky and the discord of war. Keep us alert and protect us from the dangers that surround us. Holy Mary Mother of Jesus intercessor for us all; we pray to assure receiving of the Sacraments of Penance and Holy Eucharist at the hour of our death. Through Jesus Christ Our Lord. AMEN
December 4 martyr martyrdom prisoner Saint Barbara